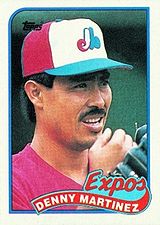 The first Nicaraguan-born major leaguer and a national hero in his homeland, pitcher Dennis Martinez was for a spell the all-time leader in wins among Latin players with 245, before being passed by Bartolo Colon. He played 23 seasons in the majors, and after overcoming alcoholism in the middle of his career, he went on to make the All-Star team four times after his 35th birthday.

Martinez first pitched for his hometown team, the Granada Sharks, as a skinny teenager. He won Bronze with the Nicaraguan national team in the 1972 Amateur World Series. In the 1973 Amateur World Series, he helped Nicaragua win a silver medal, losing the finale 1-0 to Rich Wortham and Team USA. He and teammate Tony Chevez were then signed by the Baltimore Orioles by scouts Julio Blanco-Herrera and Ray Poitevint. He made his pro debut in 1974 with the Miami Orioles, going 15-6 with a 2.06 ERA and 162 strikeouts in 179 innings. After splitting the next season with three different clubs, he went 14-8 with a 2.50 ERA for the Rochester Red Wings in 1976 and was named International League Pitcher of the Year. That September, he earned a call-up to the majors, and he made his big league debut on September 14th, earning a win in relief against the Detroit Tigers. With the Orioles for the entire 1977 campaign, he split his first full year in the big leagues between the rotation and the bullpen. 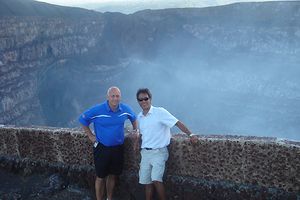 Martinez joined the Baltimore rotation in 1978 and won at least 14 games in 4 of the next 5 years. He had his finest year with the O's during the strike-shortened 1981 season, when he posted a 14-5 record and 3.32 ERA while finishing fifth in American League Cy Young Award voting. After going 16-12 in 1982, his fortunes began to decline as he struggled with alcoholism. He posted earned run averages of over 5.00 in each of the next three seasons and was finally sent down to the minors early in 1986. Finally, in June of that year, he was traded to the Montreal Expos.

After being dealt to Montreal, Martinez went 3-6 with a 4.59 ERA in 19 outings for the club in 1986. He became a free agent following the season and because of collusion, began the next year playing for the unaffiliated Miami Marlins of the Florida State League. He re-signed with the Expos in May 1987, and after going 3-2 in 7 starts for the AAA Indianapolis Indians, he was back in the Montreal rotation by June. He went 11-4 with a 3.30 ERA in 22 starts for the team that year. He put up comparable numbers in the next three seasons and played in the All-Star Game in 1990.

Martinez had what was arguably his best season for the Expos in 1991. He again played in the All-Star Game, and on July 28th of that year, he pitched a perfect game, defeating the Los Angeles Dodgers, 2-0, at Dodger Stadium. He ended that season with a 14-9 record while leading the National League with a 2.39 ERA, 9 complete games, and 5 shutouts, and finishing fifth in the NL Cy Young voting.

Following two more summers with Montreal, Martinez became a free agent and signed with the Cleveland Indians for the 1994 season. He went 12-5 with a 3.08 ERA and again was an All-Star for the Tribe in 1995 as the club won the American League pennant. He made two starts in the World Series, taking the loss in Game 2 as his team fell to the Atlanta Braves.

Martinez played one more year for the Indians and retired after going 1-5 in 9 starts for the Seattle Mariners in 1997. However, he did not stay away from the game long and came back in 1998 with the Braves. He spent the season mostly pitching out of the pen, and on August 9th, he earned his 244th career win to pass Juan Marichal for most victories by a Latin pitcher. He made four appearances for Atlanta in the NLCS, earning a win in Game 4. Following the season, he retired for good. His 245 career wins remained the record for a pitcher from Latin America until he was caught by Bartolo Colon in 2018.

It can be argued that Martinez's poor performance during his final four seasons in Baltimore (1983 to 1986) cost him a chance at the Hall of Fame. If he had performed at his 162-game averages during those four seasons, he would have finished with a won-lost record of 268-191 and a 3.50 earned-run average. His actual career won-lost record is 245-193 with a 3.70 earned-run average. There are three Hall of Famers on the list of the ten most similar players to Martinez. He was elected to the Latino Baseball Hall of Fame as part of its 2011 class.

Martinez managed the Nicaraguan national team to a 2-2 record in the 1999 Pan American Games. He served as pitching coach for the GCL Cardinals in 2007, the Palm Beach Cardinals in 2008 and 2009, the Springfield Cardinals in 2010, and Palm Beach again in 2011-2012. In 2013, he was appointed bullpen coach of the Houston Astros under new manager Bo Porter but stayed only for one season. He also served as the Minister of Sport in Nicaragua.

He managed Nicaragua in the 2011 Baseball World Cup and 2013 World Baseball Classic Qualifiers. He is the father of Ricky Martinez, who played for him in the 2013 WBC Qualifiers and with Palm Beach (2012).

He was inducted into the Canadian Baseball Hall of Fame as part of its 2016 class.