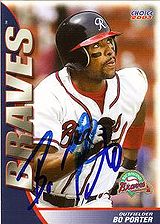 Bo Porter played 1,064 games in the minors and 89 in the majors with the Texas Rangers, Oakland A's, and Chicago Cubs after being selected by the Cubs in the 40th round of the 1993 Amateur Draft.

He was coach of the Greensboro Grasshoppers in 2005, and manager of the Jamestown Jammers of the New York-Penn League in 2006. He joined the Florida Marlins as the team's third base coach in 2007. Porter was a coach for the Marlins in 2008 and 2009 and the Arizona Diamondbacks in 2010. In 2011, he was named the Washington Nationals' third base coach. On September 27, 2012, with the Nationals headed to the postseason for the first time, it was announced that he was to be named the next manager of the Houston Astros; the team brass had been conducting interviews with candidates since the firing of Brad Mills on August 18th. Interim manager Tony DeFrancesco was to complete the current season with Houston while Porter would take over in 2013, getting a chance to be with the Nationals for the postseason.

The Astros set a franchise record for losses in Porter's first year at the helm, the third straight season they had done so. However, they were doing much better in 2014, but on September 1st Porter was fired along with bench coach Dave Trembley in what was characterized as a power struggle with General Manager Jeff Luhnow. The team was in fourth place and had already passed the previous year's win total with a month to go. In 2015, he joined the Atlanta Braves's staff as third base coach, then after the 2016 season was promoted to special assistant to GM John Coppolella.

In 2018, he was appointed by the MLBPA as manager of the special training camp facility set up on the grounds of the IMG Academy in Bradenton, FL that was opened to provide a structured spring training environment to the large number of free agents who remained unsigned as major league teams were about to open their camps.