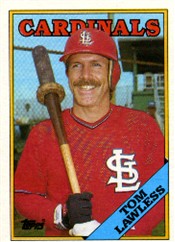 Infielder Tom Lawless was selected by the Cincinnati Reds in the 17th Round (433rd overall) of the 1978 amateur draft. He reached the Major Leagues in mid-1982 but could not claim a regular job with the team, even though he was a star with the Indianapolis Indians in the AAA American Association. He hit .308 with the Indians in 1982, then .279 with 13 home runs and a league-leading 46 stolen bases in 1983. It was the third time he had led a minor league loop in stolen bases, after swiping 60 bases for the Tampa Tarpons in 1979, and 60 more for the Waterbury Reds in 1981; he also stole 63 bases for Waterbury in 1980, but surprisingly this was not enough to lead the Eastern League that year; Bob Dernier paced the 1980 EL with 71 swipes. A scrappy hitter who knew how to draw a walk, he had more power than expected, regularly topping 20 doubles and standing among league leaders in triples, but his fielding was not enough to get him over the hump, as he was passable as a second or third baseman, but could not handle shortstop, limiting his value as a utility infielder.

In the majors, Lawless hit .212 in 165 at bats for the Reds in 1982, but with 16 stolen bases, as the team's quasi-regular second baseman over the season's second half. It would remain the only time in his career he would receive more than 100 major league at bats in a season. He spent the entire 1983 season in AAA, then made the Reds in spring training of 1984 as a back-up infielder, hitting .250 in 43 games, before being sent down again, to the AAA Wichita Aeros. On August 16th, he became the answer to a trivia question when he was traded to the Montreal Expos for Pete Rose, whom the Reds wanted to make their player-manager. The Expos were set to give Rose his unconditional release at that point, but agreed to the trade to spare Rose's ego. Lawless' new team had no particular plans for him, and he played sparingly over the rest of the 1984 season, only getting 17 at bats for a team that was short of middle infielders (after all, they were starting a washed-up Doug Flynn at second base). He was also in competition with two players very similar to himself already in the Expos' organization, Bryan Little and Al Newman. Lawless was thus traded to the St. Louis Cardinals in spring training of 1985 to complete an earlier trade for veteran left-handed pitcher Mickey Mahler.

With the Cardinals set in the infield with Ozzie Smith at shortstop, Tom Herr at second, and Terry Pendleton at third, Lawless played little and kept at the life of a typical AAAA player, shuttling between AAA and the majors. He did make a cameo appearance in the 1985 World Series which the Cardinals lost in seven games to the Kansas City Royals. He got a big break at the end of the 1987 season, when Pendleton went down with an injury in the postseason - one of a number to beset the Cardinals that fall. Manager Whitey Herzog was forced to start Lawless at third base, and he responded with a dramatic and completely unexpected three-run home run in Game 4 of the 1987 World Series against the Minnesota Twins, which was a key to the Cardinals 7-2 win. He had hit a grand total of one major league home run at that point, back in 1984 with the Reds; worse, he had only played 18 games with an .080 average during the regular season. It was his only hit of the Series, but it was also clearly the highlight of his career. He then went back to his customary anonymity, playing his last major league game in 1990 as a member of the Toronto Blue Jays. He became increasingly versatile over the years, turning into a real utility player. He put in some games in the outfield and even some emergency duty as a catcher over his last three seasons.

After his playing career, he was a minor league manager for a number of years, principally in the Midwest League. From 1997 to 1999, he was a coach for the Norfolk Tides of the International League. After returning to managing, he joined the Baltimore Orioles organization and was their minor league hitting instructor in 2005 and their minor league infield and baserunning instructor in 2007. In 2013, Lawless was named as a "development specialist", assigned to the Oklahoma City RedHawks [1]. In 2014 he served as the Astros' roving infield instructor and was interim manager of the Redhawks while manager Tony DeFrancesco was out for medical reasons. On September 1st, he was named interim manager of the Houston Astros, replacing the fired Bo Porter and guided the team to a record of 11-13 over the last month, confirming the improvements seen over the season as a whole after three years of losing of 100 or more games per season. On September 29th, the day after the regular season ended, the Astros introduced A.J. Hinch as their new skipper for 2015. Lawless was with the Corpus Christi Hooks in 2015 as infield coach and Texas League scout when the team was at home.

Lawless was the manager of the Chinese national team in the 2010 Asian Games.