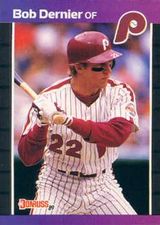 An unsigned 12th-round draft pick in 1977, Bob Dernier caught on with the Philadelphia Phillies organization and had an impressive September cup of coffee with the Phillies' World Championship team in 1980. By 1982, he was a semi-regular, and was a platoon regular on the Phillies' 1983 pennant winners. Traded to the Chicago Cubs, Dernier played a Gold Glove center field for the 1984 NL East champions, the high-water mark of his career. He had 3 game-winning RBI in 1985.

Dernier was called "White Lightning" because he was fast (218 career stolen bases) and because the stereotypes of his day assumed that all fast players must be black. He was a platoon hitter, however, batting only .238 in his career against right-handed pitching, a weakness that limited his usefulness. He was eventually limited to the role of fourth or fifth outfielder for Chicago and Philadelphia in the late 1980s.

Following his playing days, Dernier was a minor league outfield and baserunning coordinator for the Cubs from 2007 until he was named the team's first base coach in August 2010, replacing Mike Quade (who had become manager).