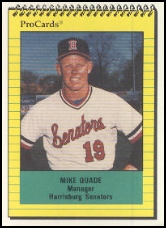 Mike Quade (pronounced: KWA-Dee) was appointed interim manager of the Chicago Cubs, taking over for Lou Piniella, after their game of August 22, 2010. He became the full-time manager after the season.

Quade was drafted in the 22nd round of the 1979 amateur draft by the Pittsburgh Pirates and played five seasons of minor league ball, finishing with 269 walks against only 241 strikeouts. After playing under long-time minor league manager Johnny Lipon at Carolina League Salem in 1980, Quade returned at age 25 and 26 for additional Carolina League seasons as player/coach under Lipon in Alexandria in 1982 and 1983, in order to continue his managerial apprenticeship.

In addition to managing for seventeen seasons in the minor leagues, Quade was a coach for the Jacksonville Expos in 1987 and the West Palm Beach Expos in 1988. He was the first base coach of the Oakland A's from 2000 to 2002. He joined the Chicago Cubs coaching staff for a short part of 2006 as the team's interim third base coach (temporarily taking the place of Chris Speier). Beginning in 2007, he became the club's third base coach on a full-time basis. The Cubs' manager, Lou Piniella, had announced that he would retire after the 2010 season. However, after taking a leave of absence to be with his ailing mother in August, he decided to retire earlier, leaving the team in the hands of Quade for the remainder of the year. The Cubs played very well under Quade, going 24-13, giving him a shot at the full-time managerial job in 2011. He was prefered to Cubs Hall of Famer Ryne Sandberg, among others. Quade was let go as manager of the Cubs after a poor 2011 season that saw the team finish 20 games below .500. The Cubs brought in a new front office team of President Theo Epstein and General Manager Jed Hoyer who chose to bring in their own manager instead of keeping the incumbent Quade.

Quade was a roving outfield/baserunning coordinator for the New York Yankees in 2014. In 2015 he returned to managing with the Rochester Red Wings, the Minnesota Twins' top farm team.

Highlights of his career include winning the 1991 John McHale Award, which was the Montreal Expos' award for excellence in player development. He was the manager of the year in his league in both 1991 and 1993, and in 1999 won the AAA World Series. He won his 1,000th game as a minor league manager on April 18 2004. He has also won the Dominican League Championship and Caribbean World Series and managed Team USA to 4th place in the 1999 Intercontinental Cup.