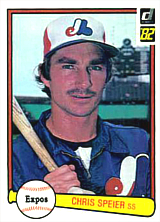 The father of pitcher Justin Speier and uncle of Gabe Speier, shortstop Chris Speier played 19 years in the majors and later was a major league coach.

Early in the 1977 campaign, Speier was traded to the Montreal Expos for Tim Foli, and he was the Expos' regular shortstop for the next seven years, including in 1981 when they reached the NLCS. Because he could never hit as well with the Expos as he had done in his first few years with the Giants, he was often in danger of losing his job: in spring training in 1979, manager Dick Williams hesitated on where to start Rodney Scott: at second in place of Dave Cash, or at short in place of Speier. He decided to bench Cash, then in 1980, he moved Scott to shortstop for a time and tried both Tim Raines and Tony Bernazard at second base, until he grudgingly gave Speier his job back. On September 22, 1982, he set an Expos record with 8 RBI in a game against the Philadelphia Phillies, thanks to a bases-loaded triple in the 2nd, a two-run single in the 3rd, and a three-run homer off Porfirio Altamirano in the 7th. His job was again in jeopardy in spring training in 1983, and this time he did lose it, with Bryan Little starting the year at shortstop. He did come back to play 88 games, as Little fizzled after a hot start. In 1984, the Expos preferred another rookie over him in Argenis Salazar, but when the youngster turned out to be a complete bust, instead of giving Speier his old job back, the Expos traded him to the St. Louis Cardinals for Mike Ramsey, who shared the job with Derrel Thomas and Salazar for the season's last three months. He only stayed briefly with the Cardinals, finishing that season with the Minnesota Twins, then joined the Chicago Cubs in 1985 as a back-up infielder before ending his career back with the Giants from 1987 to 1989.

Speier hit for the cycle twice in his career, ten years apart. As a Montreal Expo, he did it against the Atlanta Braves in 1978. During his time as a bench player with the Giants, he did it again in a 21-2 rout of the St. Louis Cardinals during the summer of 1988.

After his playing career ended, Speier was a roving minor league instructor for the Giants from 1990 to 1994 and was hitting coach for the Orlando Cubs in the Cubs system in 1995. He joined the Arizona Diamondbacks organization the next year and spent four seasons managing in the minors. He went on to serve as a major league coach with the Milwaukee Brewers in 2000, the Diamondbacks in 2001, and the Oakland Athletics in 2004. In 2005 and 2006, he was a member of the Cubs staff.

Following the 2007 season, he joined the Cincinnati Reds as bench coach. On September 19, 2012, he took over as the Reds' skipper on an interim basis when Dusty Baker was hospitalized with an irregular heartbeat. In 2016, when Baker was named manager of the Washington Nationals, Speier joined his coaching staff as bench coach, returning to the organization for which he had spent much of his playing career. In May of 2017, he filled in for Baker for a couple of games when the manager was attending his son's graduation. In 2020, he was appointed as quality control coach for the Houston Astros shortly after Baker's appointment as the team's manager, but retired at the end of the season.