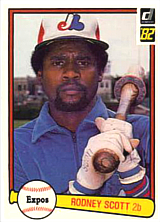 Rodney Scott was born on October 16, 1953 in Indianapolis, IN. He attended Arlington High School in Indianapolis where he played baseball, basketball and football. He was All-Indiana in baseball and also starred in basketball. In June 1972, he was picked in the 11th round by the Kansas City Royals. He signed shortly thereafter and was sent to the Royals Baseball Academy, playing with the GCL Royals. He was the best offensive player on the team with a club-best .890 OPS. His line was .376/.426/.464 with 16 stolen bases in 35 games, while being caught only once.

Scott began the 1973 season in the California League with the San Jose Bees as the team's regular second baseman. He struggled offensively, with a line of .220/.296/.302. He finished the season in the Pioneer League with the Billings Mustangs, where he played mostly shortstop. He led the team with 26 stolen bases and 51 runs in 64 games. His line was .297/.381/.356. He split the 1974 season almost equally between San Jose and the Waterloo Royals, in the Midwest League. He had a remarkable 85 stolen bases in 91 attempts combined. Overall in 121 games, his line was .279/.386/.333. His great speed and good eye would be his main weapons once in the big leagues.

By 1975, the Oakland Athletics had been experimenting for a few years with the use of a player assigned almost exclusively to pinch-running duties. With Scott, the Royals thought they had their man and without any experience above Class A level, he made the team out of spring training. He had only four plate appearances in the first two months of the season while making 18 appearances. He was sent down in late May and was called up twice during the season. In the minors, he played 32 games combined with the Jacksonville Suns in the Southern League, and the Omaha Royals in the American Association, hitting a solid .316 with a .412 OBP and 17 stolen bases. He got his first hit in the majors in late September in one of his only three starts in 48 games. In December, he was traded to the Montreal Expos to complete a March trade that sent catcher Bob Stinson to Kansas City. For Scott, it would be the first of three stints with the Expos organization.

Scott was the Denver Bears' main shortstop in 1976 in the American Association. He led the team in stolen bases (35) and was second in runs (75). In 114 games, his line was .307/.395/.400. That Denver team was particularly strong, featuring Andre Dawson, Ellis Valentine, Warren Cromartie and Tony Scott in the outfield and league MVP Roger Freed at first base. He was called up in September and went 4 for 10. In spring training in 1977, as the Expos were desperate for pitching, especially relief pitching, Scott was traded to the Texas Rangers for pitcher Jeff Terpko. But Scott never played a game with the Rangers in the regular season. Before the end of March, the Oakland Athletics acquired Scott and P Jim Umbarger in a trade for OF Claudell Washington.

1977 was Scott's first complete season in the majors. He was used at both second base and shortstop. It was not until early July that Scott earned a starting job. He was hitting close to .300 at that point. But from mid-July to the end of August, he couldn't crack the Mendoza Line (.200) and saw his batting average drop to .253. In 133 games, his line was .261/.342/.294 with 33 stolen bases, second on the team. Scott was traded at the tail end of spring training in 1978, this time to the Chicago Cubs for pitcher Pete Broberg.

Scott began the 1978 season not with the Cubs, but in the minors with the Wichita Aeros, back in the American Association. Furthermore, it was as an outfielder that he was mostly used. He had to wait until June to get the call back to the bigs; in 63 games, he was hitting .262 with a .339 OBP in AAA. He had 36 stolen bases, which would still top the team at the end of the season. Scott, combined with Ivan DeJesus, made an impact in terms of speed at the top of the lineup for the Cubs. In 78 games, he scored 41 runs and had 27 stolen bases. More importantly, his OBP was .403 as he drew 43 walks to go with a career-best .282 batting average. During the season, he had several run-ins with manager Herman Franks. The Cubs made him available after the season; in December, Scott and Jerry White were traded to Montreal for outfielder Sam Mejias in what turned out to be one of the most lopsided trades in Expos history.

In the offseason, Scott and the Expos struggled to agree on a contract and the split was settled in arbitration, in Scott's favor. The Expos wanted to pay him as a substitute but Scott had other ideas. When the Expos made the acquisition of Scott and White, the goal was to add both depth and speed to the lineup. Early in spring training in 1979, manager Dick Williams took a liking to Scott, because of his speed, defense and fearlessness, and in mid-March, it was established that Scott would play regularly. It was just a matter of whether it would be at second or short. Both incumbents, Dave Cash and Chris Speier were struggling in camp. Cash was coming off his worst season offensively and had been removed late in games with the team ahead because of defensive shortcomings. As for Speier, he barely played after showing up with a bad back. At the end of camp, Williams announced Scott would play second and Cash would be relegated to the bench.

For the next three seasons, Scott patrolled second base while hitting second most of the time. All three seasons, he led the team in walks. Repeatedly during his first two seasons, Dick Williams would brag about Scott, sometimes hinting that he was the team MVP. In his first season, he led the team with 39 stolen bases. His line was an unspectacular .238/.319/.294 and he hit the only three homers of his career. But few baserunners could unnerve a defense and challenge it the way Scott could and Williams loved the way he went about his business on the basepaths.

For the second year in a row, Scott brought the Expos to arbitration before the 1980 season. This time, the Expos prevailed but Scott would still earn his first six-figure salary ($125,000). Scott had a hard time getting untracked that year. The Players Association called a strike in late March for the remainder of spring training. Many players decided to train on their own but the Expos were one of the few teams that saw its players leaving the premises. When the season began, Scott had done almost nothing for a week and it showed. It took him more than two months to get his batting average definitely over .200 (including a dismal .143 in April). For a while in May, he was benched in favor of Tony Bernazard, but he eventually reclaimed his starting job. Scott had a new leadoff hitter in 1980, one he could wreck havoc with on the bases: Ron LeFlore. Together, they stole 160 bases (63 for Scott and 97 for LeFlore), breaking a record for most by two teammates. For the second year in a row, the Expos were eliminated on the last weekend of the season. Scott led the National League in triples and his line was .224/.307/.293.

His stats went down in 1981 as did most of the offensive numbers throughout the majors. His line was .205/.308/.250. The Expos made the playoffs after winning the second-half of the split season, a format adopted due to the midseason strike. Due to a shoulder injury, he did not play in the NLDS against the Philadelphia Phillies, being replaced by Jerry Manuel. He was back for the NLCS against the Los Angeles Dodgers. In the five-game loss, Scott had only three singles and a walk. In early September, Scott lost his most important ally when the Expos fired Dick Williams, replacing him with Jim Fanning. After the season, Fanning made it clear that he wanted more offense from his middle infield, putting Scott and Chris Speier in the line of fire.

In spring training in 1982, it was obvious rookie Wallace Johnson would be given every chance to win the starting assignment at second base. Johnson had become a cult hero in 1981 when his pinch-hit triple in the next-to-last game of the season gave the Expos the lead in the game that clinched a playoff spot. Johnson showed strong offensive numbers in the minors but some doubted his defensive abilities. Johnson did enough in March to get Fanning to give him the job. It was the start of what would be a merry-go-round at second base for the Expos. When Johnson started the season struggling and pressing, he was sent to the minors. Scott started a handful of games in late April but did not do much. The writing was on the wall and in early May, he was released by the Expos. This did not sit well with his good friend Bill Lee, who decided to go to a nearby bar during the game that Saturday afternoon as a protest. Lee came back late in the game as the Expos tried to mount a comeback against the Dodgers, but management did not find the stunt funny at all. The next day, Lee was released as well.

Scott was free to sign with whichever team he wanted and Dick Williams, now manager of the San Diego Padres, was interested. In his book, Williams states that he was told the Padres would not try to sign Scott, due to rumors about drugs. Scott eventually signed with the New York Yankees. He went to play for the Columbus Clippers in the International League. He went on a tear, hitting .366 with a .450 OBP in 30 games. The Yankees wanted to call him up in July but when Scott asked for a new contract, the team relented. He was eventually called up in August after an injury to Willie Randolph. He had 9 starts but hit only .192 and was released before the end of the month.

In 1983, Scott decided to call the Expos for a chance to come back. He was signed in early July and in two months, did fairly well with Wichita, now the Expos' affiliate, hitting .307 in 48 games with a .384 OBP. But he had only 5 stolen bases and his diminished speed did enough to discourage the Expos from calling him up for the September stretch.

Scott played three more seasons of pro baseball in the Mexican League, hitting a combined .287 and drawing 169 walks in 230 games. In 1989 and 1990, he played in the Senior Professional Baseball Association.