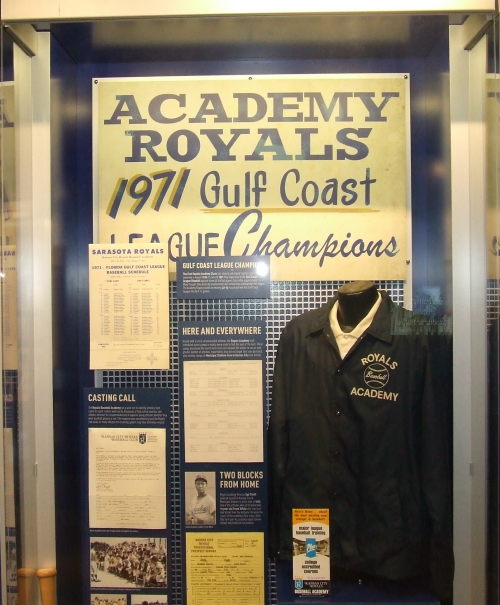 The Kansas City Royals Baseball Academy was established in 1971 in an attempt by the Kansas City Royals to find baseball talent outside of regular player development channels. It was set up as a complex in Florida in which talented athletes with limited baseball experience would be taught the fundamentals of the game as well as some basic life skills in order to develop their talent, and provide them with some concrete benefits if they failed to become baseball players.

The Academy fielded a team in the Gulf Coast League for a few seasons, which competed against the GCL Royals and other teams in the Rookie-class league. It did relatively well for a few years. The academy was responsible for finding a few talented players, most notably Frank White, but also U.L. Washington and Jeff Cox, but was shut down in 1975.

The project was highly controversial at the time, even within the Royals' organization, because it departed from conventional thinking about baseball skills. For example, Charlie Metro, a veteran of the player development field, was opposed to the idea because he felt that the players were not being taught by major leaguers and therefore would not acquire the skills needed to succeed at higher levels. In fact, the Academy was successful in finding players with great speed and some defensive value, but failed in finding hitters or pitchers.

However, the Royals' Academy can be considered the blueprint for the player development complexes that were later set up by teams in the Dominican Republic and elsewhere in Latin America, and the amateur Baseball Academies set up by various countries, notably Canada and Australia, to nurture young players on their national baseball teams in the absence of a well-established high school baseball tradition. These later ventures have in fact been very successful in increasing the number of Major League players from these countries.