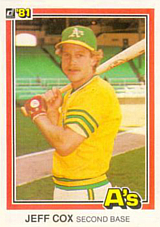 Second baseman Jeff Cox signed his first pro contract with the Kansas City Royals in August 1973 but was released in early 1974 after attending the Royals Baseball Academy. He was signed by the New Westminster Frasers in June 1974 and sold to the Portland Mavericks two weeks later. Portland released him in June 1975 and he signed with the Oakland Athletics three days later. In 1977, he was a Southern League All-Star with the Chattanooga Lookouts and led the circuit with 68 stolen bases.

Cox reached the majors with Oakland on July 1, 1980 and got his first hit off Lary Sorensen of the Milwaukee Brewers the next day. He went 9-for-18 in his first 5 games but hit under .200 thereafter, ending the season at .213. He earned a second cup of coffee in 1981, appearing in one game at second base and another as a pinch runner without any plate appearances. He later played in the Detroit Tigers and Kansas City Royals systems and spent time as a player/coach in the Cincinnati Reds organization with the Vermont Reds in 1984.