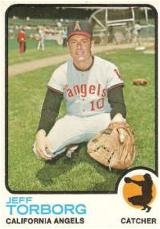 Catcher Jeff Torborg spent a decade in the majors with the Los Angeles Dodgers and California Angels. He caught three no-hitters (by Sandy Koufax, Bill Singer and Nolan Ryan) in his career. Although a top hitter in college at Rutgers University, he was not a strong hitter in the majors with a lifetime .214 batting average and a .265 slugging percentage.

He became a Cleveland Indians coach in 1975 and was named the club's skipper in 1977, succeeding Frank Robinson. After that, he spent ten seasons as a New York Yankees coach. He later went on to manage the Chicago White Sox, New York Mets, Montreal Expos, and Florida Marlins. In 1990 and 1991, his White Sox teams finished second, and he was manager when the rookie Frank Thomas came up. In 2003, he was the manager - for part of the season - for the Florida Marlins, who won the 2003 World Series under the guidance of Jack McKeon after he was fired.

His son, Dale Torborg, played baseball at Northwestern University and later was a professional wrestler known as "The Demon". He currently is Minor League conditioning coordinator for the White Sox.