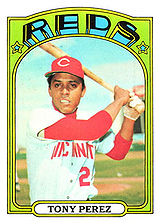 Tony Pérez is a Hall of Famer who played 23 years in the big leagues, driving in 1,652 runs (#32 on the all-time list). He played on four World Series teams, including the Big Red Machine teams of the 1970s and the 1983 Philadelphia Phillies squad that reunited some of the Big Red Machine players.

Signed by the Cincinnati Reds as an amateur free agent before the 1960 season, Pérez reached the major leagues late in the 1964 campaign. He made the Reds out of spring training in 1965 and split time at first base with Gordy Coleman that year and with Coleman and Deron Johnson in 1966. Pérez began 1967 as the Reds' starter at first base with Johnson moving to third. After Johnson was injured in May, Pérez moved to third base. He was permanently installed there after rookie Lee May proved himself a more than adequate option at first. Pérez was named to his first All-Star team that summer, and his 15th-inning solo home run provided the margin of victory for the National League in the game. Pérez would remain the Reds' starting third baseman through the 1971 season, switching back to first base for 1972 after May was traded to the Houston Astros.

After the 1976 season, during which the Reds won their second straight World Series title, he was traded to the Montreal Expos. He was the starting first baseman in Montreal from 1977 to 1979, the last of these seasons being the first winning one in team history. He signed as a free agent with the Boston Red Sox in 1980, then after three seasons in the American League, returned to the NL with the Philadelphia Phillies in 1983. That year, he returned to the World Series for the fifth time. He completed his career with three seasons as a part-time player back with the Reds from 1984 to 1986.

The selection of Pérez to the Hall of Fame by the Baseball Writers Association of America in 2000 promised to be the most important selection in years, because of the shape of Pérez's career. Pérez, although he had a very long career, was never an MVP and never led the league in any offensive category. His selection gave fodder for the fans of other similar players who have not yet gotten into the Hall of Fame. According to the similarity scores method, the most similar players are Harold Baines, Dave Parker, Andre Dawson, Rusty Staub, and Dwight Evans, none of whom are in the Hall of Fame, except for Dawson, who was elected in 2010, and Baines, who was a Veteran's Committee selection in 2019; some of these added significant defensive skills on top of the offensive skills that the similarity scores method measures.

Pérez also managed for parts of two seasons, with the Reds in 1993 and the Florida Marlins in 2001. In neither case was he given the chance to even finish his first season, even though his teams were only a few games under .500 both years. From 1993 to 2017, he was a Special Assistant to the General Manager with the Fish, relieved of his post upon the ascension of the Derek Jeter-led ownership group.

He is the father of Eduardo Pérez and minor leaguer Victor Pérez.

Tony was inducted into the Reds Hall of Fame in 1998 and had his #24 retired by the club in 2000. In 2015, the Reds dedicated a life-size sculpture of him on the Crosley Terrace at Great American Ball Park.

"When there's a runner in scoring position, I can't think of any batter I'd rather have at the plate than Pérez." - Sparky Anderson