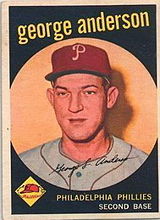 "I got good players, stayed out of their way, let them win a lot and then just hung around for 26 years." - Anderson, in his Hall of Fame acceptance speech, 2000 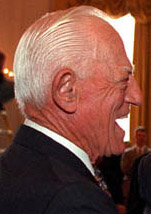 Hall of Fame manager George "Sparky" Anderson (who played one season in the bigs) led the Cincinnati Reds to two World Series titles and the Detroit Tigers to another. He is one of only two managers in the Major League Baseball history to win the World Series with clubs in both leagues (Tony LaRussa is the other). When he retired, his 2,194 wins were third most in baseball history. Today, he ranks sixth in career managerial wins, behind Connie Mack, John McGraw, LaRussa, Bobby Cox, and Joe Torre. Additionally, he is the only skipper to be the all-time wins leader for two different teams (the Reds and Tigers).

"I didn't have a lot of talent, so I tried to make up for it with spit and vinegar." - Anderson

Born in South Dakota, Anderson grew up in Los Angeles, where he played high school and American Legion ball with Billy Consolo, a future member of his coaching staff with the Tigers. A "good field, no-hit" middle infielder, he was signed by the Brooklyn Dodgers organization and began his pro career in 1953. He played six seasons in their system before being traded to the Philadelphia Phillies for Jim Golden, Rip Repulski, and Gene Snyder following the 1958 season.

Anderson opened 1959 as the Phillies regular second baseman and held on the the job the entire summer despite hitting just .218 with only 12 extra base hits in 152 games. His struggles at the plate spelled the end of his major league playing career, and he spent the next four seasons with the Toronto Maple Leafs of the International League. His most notable teammates on the 1959 Phillies were Richie Ashburn and Robin Roberts, who were both 32 at the time.

"Talent is one thing. Being able to go from spring to October is another." - Anderson

As Anderson's playing career came to a close at age 29, he planned to return home and go into his family's house painting business. That changed in 1964 when he was offered the Toronto managerial job. He led the club, a Milwaukee Braves affiliate, to an 80-72 record and a fifth-place finish that year before moving on to the St. Louis Cardinals organization. He led his teams to the league playoff finals in each of the next four summers, winning a Western Carolinas League crown with the Rock Hill Cardinals in 1965 and a Southern League championship with the Asheville Tourists in 1968. The next summer, in 1969, he joined the coaching staff of skipper Preston Gomez on the expansion San Diego Padres. On June 14, 1966, he was the manager of the St. Petersburg Cardinals when they played the longest game in organized baseball history up to that point, losing 4-3 to the Miami Marlins in a game that took 29 innings to complete. 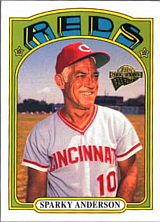 After a summer in San Diego, Anderson was slated to be a California Angels coach in 1970 until he was hired to replaced Dave Bristol as Cincinnati Reds manager instead. With a lineup that included Johnny Bench, Tony Perez, and Pete Rose, he won 102 games and the pennant in his first season, losing the World Series in five games to the Baltimore Orioles. After an injury-plagued 1971 (his only sub-.500 season with Cincinnati), the Reds came back and won another pennant in 1972, losing to the Oakland Athletics in the World Series. They took the National League West division title in 1973, then finished a close second to the Los Angeles Dodgers in 1974.

Finally, in 1975, Anderson captured his first big league crown, as the Reds blew the division open by winning 108 games, swept the National League Championship Series, and edged the Boston Red Sox in a drama-filled, seven-game World Series. They repeated in 1976 by winning 102 games and ultimately sweeping the New York Yankees in the Series. During this time, Anderson became known as "Captain Hook" for his penchant for taking out an underperforming starting pitcher early in the game at the first sign of weakness and going to his bullpen, relying heavily on closers Will McEnaney and Rawly Eastwick, and other great relievers such as Pedro Borbon and Clay Carroll.

Following their second consecutive title, the Reds traded Perez to the Montreal Expos, and the club finished second to the Los Angeles Dodgers in both of the next two seasons. Anderson was fired after the 1978 campaign. He returned home to Los Angeles and briefly worked as a broadcaster. During this time, he also guest-starred as himself in a 1979 episode of (appropriately enough) WKRP in Cincinnati. The episode was titled "Sparky". 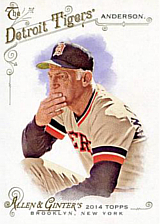 Anderson soon returned to the dugout, replacing Les Moss as manager of the Detroit Tigers on June 14, 1979. With a lineup of young players including Alan Trammell, Lou Whitaker, Lance Parrish, and Jack Morris, the Tigers became a winning club almost immediately, but they did not get into serious contention until 1983, when they finished second.

Under Anderson, the 1984 Tigers won their first 9 games and opened the season 35-5 (a major league record). They breezed to an American League East Division title, and their 104-58 record made Anderson the first manager ever to win 100 games in a season in both leagues. The team swept the Kansas City Royals in the American League Championship Series and beat the San Diego Padres in the World Series for Anderson's third title. With the championship, Anderson became the first skipper to pilot a club to championships in both the American and National Leagues. Ironically, either manager in the 1984 Series would have been the first to win in both leagues, since Dick Williams of the Padres had previously won the series with the Oakland Athletics of the AL. After the season, Anderson won the first of his two Manager of the Year Awards with the Tigers.

Following two third-place finishes, Anderson led the Tigers to the majors' best record in 1987, although they needed last-week heroics to finish ahead of the Toronto Blue Jays. The team was upset in the ALCS by the Minnesota Twins. Nonetheless, he won his second Manager of the Year Award. After contending again in 1988, the team collapsed in 1989, and he missed three weeks of that season suffering from nervous exhaustion.

Anderson did perhaps his best managerial job in 1991, when the Tigers finished last in batting average, first in batting strikeouts, and near the bottom of the league in most pitching categories, but still led their division in late August before settling for a second-place finish. The secret was a power-packed lineup led by sluggers Cecil Fielder, Mickey Tettleton and Rob Deer which led the league in home runs and walks that season. He retired from managing after the 1995 season with a lifetime record of 2,194-1,834, for a .545 winning percentage. Overall in the postseason, Anderson's clubs were 34-21, posting a .619 winning percentage.

After retiring from the dugout, Anderson moved back up to the booth in 1997 and 1998 as an Anaheim Angels broadcaster. He was elected to the Hall of Fame and the Cincinnati Reds Hall of Fame in 2000. On May 28, 2005, his number 10 was retired by the Reds. In 2006, construction was completed on George "Sparky" Anderson Field at Ullman Stadium at California Lutheran University's new athletic complex. He was inducted into the Canadian Baseball Hall of Fame and Museum in 2007.

Anderson died from complications from dementia in 2010. He was 76 years old. The Tigers then followed the Reds in retiring Sparky's number - 11 in this case - on June 26, 2011. They also wore a home plate-shaped patch on the right sleeve of their uniforms during the season in his honor, inscribed with "Sparky 11".

Some or all content from this article is licensed under the GNU Free Documentation License. It uses material from the Wikipedia article "Sparky Anderson".