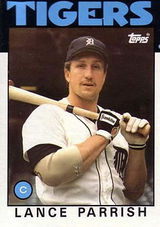 Lance Parrish was one of the top catchers of the 1980s and 1990s. In a 19-year major league career, he hit 324 home runs, won three Gold Gloves and was named to eight All-Star teams.

His score on the Hall of Fame Monitor is 107, which puts him at the level of a "likely Hall of Famer", although he does not do as well on the other Hall of Fame tests. Parrish has one Hall of Famer on his similarity scores list, that one being Gary Carter at 880.

Lance was a first-round pick by the Detroit Tigers in 1974 and spent 1974 to 1977 in the minors, showing power by hitting 55 home runs in that time. He made his major league debut in September of 1977 and after that was in the majors for good. While his major league batting averages were low in 1977 and 1978, he kicked it up to .276 in 1979 and his batting average stayed decent for most of his Detroit years.

After the 1986 season he became a free agent and signed with the Philadelphia Phillies. While his best years were with Detroit, he still put in many decent years after that. He spent a couple of years with the Phillies, three and part of a fourth with the California Angels, part of one with the Seattle Mariners, and one each with the Cleveland Indians, Pittsburgh Pirates and Toronto Blue Jays. His only World Series was in 1984, when he slugged .500.

He is not to be confused with his contemporary Larry Parrish, who was also a slugger and who managed the Detroit Tigers in the late 1990s.

After his playing career ended, Parrish was a minor league catching instructor for the Kansas City Royals in 1996. He coached the San Antonio Missions in 1997-1998, taking over as manager during 1998. From 1999 to 2001 he was a coach for the Detroit Tigers, then a television broadcaster for the Tigers in 2002, then a Tiger coach again through 2005. In 2006, he was manager of the Ogden Raptors of the Pioneer League and he was named inaugural manager of the 2007 Great Lakes Loons of the Midwest League.

Parrish's son David was selected in the first round of the 2000 amateur draft by the New York Yankees but never made the majors.

Parrish is the modern leader in passed balls with 192.