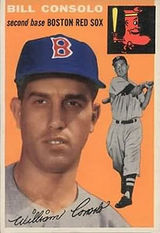 Consolo was a boyhood friend of Sparky Anderson. He was a baseball and track star at Dorsey High School and was named Los Angeles city player of the year in 1951 and 1952. Anderson and Bill Lachemann (brother of Rene and Marcel) were teammates at Dorsey and also on a national champion American Legion Baseball team. In the 1960s, on retirement, he became a barber at the Statler Hilton Hotel in downtown Los Angeles, succeeding his father. Source: L.A. Times obituary.