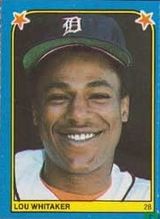 Lou Whitaker was born in New York, NY but was raised in Martinsville, Virginia and played for the Martinsville High School Bulldogs as a pitcher. A second baseman in the majors, he spent his entire career with the Detroit Tigers. He was known throughout his career as a very private person and spoke very little to the media.

At the 1985 All-Star Game in Bloomington, MN, Whitaker left his uniform in his car at the airport in Detroit. When Whitaker realized his error, an emergency uniform was flown in but was lost in transit. Whitaker was forced to purchase a replica jersey from a vendor, write the number 1 on the back, wear a Cleveland Indians batting helmet, and borrow a glove from Cal Ripken Jr.. To add insult to injury, Whitaker went 0-for-2 in the game.

During his career, it was generally assumed that Whitaker would get into the Hall of Fame, as he was the outstanding second baseman in the American League for over a decade (as his All-Star nods, Gold Glove and Silver Slugger Awards attest). However, his one year on the BBWAA ballot, in 2001, yielded only 15 votes, an absurdly low total for someone so well qualified. It was a strong ballot, with 8 of the players finishing ahead of him having since been elected by the BBWAA, and another 10 or so being under active consideration for future election by the Veterans Committee. The three most similar players to Whitaker based on the similarity scores method give a sense of why he would be a good candidate, in spite of having passed under the BBWAA radar: they are Ryne Sandberg, Alan Trammell and Roberto Alomar. Sandberg and Alomar were elected easily, while his long-time teammate Trammell had received significant support in BBWAA elections and was eventually elected by the Veterans Committee in 2018. In 2020 he appeared for the first time on the Veterans Committe's ballot, one of ten names from the "Modern Baseball" era, spanning 1970-1987.

He appeared in an episode of Magnum PI in 1984 (along with double play partner Trammell) (Magnum PI Season 4 Episode: A Sense of Debt. At minute 27 of the 48 minute episode.)[1] 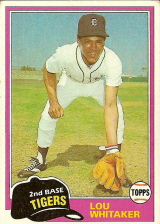