Note: This page links to Cal Ripken, Jr., the Hall of Fame player. For his father who was a major league manager in 1987 and 1988, click here. 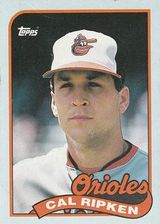 Shortstop Cal Ripken, famous as baseball's Iron Man for setting a new record for consecutive games played, was elected to the Hall of Fame in 2007 with the third-highest vote total in Hall of Fame history. A two-time MVP and also 1982 Rookie of the Year, he was named to the All-Star team an astounding 19 times and played his entire career with the Baltimore Orioles.

Ripken was selected by the Orioles in the second round of the 1978 amateur draft and made an inconspicuous pro debut that summer, hitting .264/~.336/.301 in 63 games with the Bluefield Orioles. He had 33 errors, leading Appalachian League shortstops. He hit .303/~.340/.417 with 5 homers in 105 games with the Miami Orioles the next year. He led the Florida State League with 28 doubles and finished 4th in average. He split the year between shortstop and third base. He struggled a bit at the AA level, hitting just .180/~.219/.361 in 17 games with the Charlotte O's. He returned to Charlotte in 1980 and had a breakout season, hitting .276/~.372/.492 and clubbing 25 homers, tied for fourth in the Southern League. His .933 fielding percentage led the league's third basemen and his 9 sacrifice flies tied Mike Gates for the lead.

Ripken spent most of 1981 with the Rochester Red Wings. He hit .288 with 23 home runs and 75 RBIs in 114 games with the club and played all 33 innings of the longest game in baseball history (he went 2-for-13 while playing third base). In August, he was called up by the Orioles. 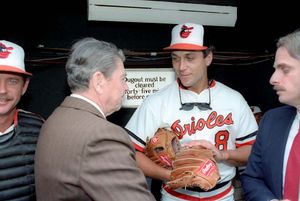 Ripken played in every Orioles game from May 30, 1982 to September 19, 1998. The first game of the streak was a combined one-hitter by rookie Jim Gott and Roy Lee Jackson of the Toronto Blue Jays. He had already played 22 straight games before sitting out the second game of a doubleheader the day before the streak began; Floyd Rayford had started at third base in his place in that game. On July 1st, he moved to shortstop, replacing Lenn Sakata, and would stay there until the last days of the 1996 season, when he was switched back to third base.

"The Streak" took on mythical proportions as Ripken played game after game in the 1990s. There were some close calls that almost ended the streak:

On September 6, 1995, Cal Ripken passed Lou Gehrig by playing in his 2,131st consecutive game. The game, televised nationally, was held up for 22 minutes after the game became official in the 5th inning. It was the first major moment after the disastrous strike of 1994 and 1995.

Then there was the bizarre photo shoot before the 1996 All-Star Game. As the AL stars were stepping off a makeshift platform, Chicago White Sox pitcher Roberto Hernández slipped and slammed his forearm into Ripken's nose while trying to catch his balance. Although Ripken broke his nose, he had it reset and played into the 7th inning. Of course, he was back in the Orioles' starting lineup two days after that.

Ripken continued his streak after breaking Gehrig's record. On June 14, 1996, he passed Sachio Kinugasa. Kinugasa had played 2,215 consecutive games in Nippon Pro Baseball. Ripken finally voluntarily sat out a game on September 20, 1998. Ryan Minor replaced him at third base. He had played in 2,632 consecutive games.

His move to shortstop in 1982 was controversial, as he was considered by many to be too big to play the position at 6' 4", 225 lb. However, he compensated for his lack of agility by excellent positioning, and there is no evidence that his defensive play cost the Orioles anything. He was of, course, a much better hitter than the average shortstop, especially because of his home run power. Teams began looking for other power-hitting shortstops in his mold after he proved to be successful, but there have not been many who have been able to both field the position and hit for power. The New York Mets did try to move Howard Johnson there for a spell, as he was a similar type of player, but he never really made his home at the position.

Ripken is also the only player to have been selected for the Topps All-Star Rookie Team twice. In 1981, he was selected in spite of hitting just .128 in 23 games, just because there was no other remotely qualified rookie who played short that season. In 1982, not having exhausted his rookie eligibility, he was selected again, this timke after an outstanding year.

In addition to his consecutive game streak, Ripken also holds the record for the most consecutive innings played: from June 5, 1982, until September 14, 1987, when he was replaced in the field in the top of the 8th inning by Ron Washington, with his team down 17-3 to Toronto, he played every inning of every game the Orioles played, for a total of 8,264 consecutive innings. The man whose record he broke is 19th century player George Pinkney, whose streak ran to 5,152 consecutive innings. Until August 4, 2017, he held the record for most times grounded into a double play with 350, but was passed by Albert Pujols.

Cal Ripken is the son of manager Cal Ripken, Sr. and the brother of Billy Ripken, who was at one time his double play partner. His uncle, Bill Ripken, was a minor league outfielder 1947-1949. Ripken married his first wife Kelly in 1987. They had two children together, Rachel (b. 1989) and Ryan (b. July 27, 1993). Kelly and Cal divorced in 2016 after a year-long separation. Ryan Ripken, a left-handed first baseman, began playing in the minor leagues in 2014. Cal married his second wife, Laura, in 2018.

On July 24, 2012, Ripken's mother Vi was abducted at gunpoint from her home in Aberdeen and returned unharmed 24 hours later. The case was not solved and a year later Cal offered a $100,000 reward to anyone who could provide information that leads to an arrest.

In August 2020, he revealed that he had been stricken by prostate cancer earlier that year but had made a full recovery following surgery.

The Ripken Baseball project will also have a 50-acre youth baseball academy on the Ripken Stadium grounds in Aberdeen, which will have five models of Memorial Stadium, Ebbets Field, Fenway Park, and Yankee Stadium, in addition to the model of the Oriole Park at Camden Yards which will hold the Cal Ripken World Series, formerly known as the Babe Ruth World Series.

Ripken is very involved in the promotion of youth baseball, being the main sponsor of Cal Ripken Youth Baseball, an alternative to Little League Baseball. He has also written a number of children's books on baseball themes, along with Baltimore Sun columnist Kevin Cowherd. Aimed at children aged 8-14, the books are Hothead, Super Slugger and Wild Pitch; they follow the members of a youth baseball team and deal with issues such as anger management, bullying and self-confidence.

In 2015, he was named a special adviser for youth programs and outreach by Commissioner Rob Manfred. 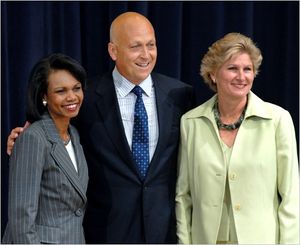 Baseball Hall of Famer Cal Ripken Jr. becomes a "special sports envoy" during a ceremony with Secretary of State Condoleezza Rice, left, and Under Secretary of State for Public Diplomacy Karen Hughes, at the State Department in Washington, August 13, 2007.

In 2007, Ripken was a U.S. State Department public diplomacy sports envoy. He was sent to "train Chinese youngsters in the cities of Beijing, Shanghai and Guangzhou, with the hope of planting a few seeds that will "grow" the game of baseball in China." [1]

On January 9, 2007 it was announced that Ripken had received 537 of 545 votes for the Hall of Fame. He was inducted with Tony Gwynn, in July of that year. In 2011 he was elected to the International League Hall of Fame.