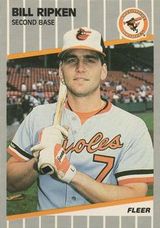 That same year, 1987, he came up with the Orioles for 58 games, hitting .308. He was the regular second baseman for the Orioles from the time he came up through 1992. His debut on July 11, 1987 was the same day that the Orioles released Rick Burleson, who had been playing second base for the team. Burleson, primarily a shortstop in his career, was playing in his last major league season.

In 1990 Ripken had another good season with the bat, leading the Orioles in hitting, with a .291 batting average.

His father, Cal Ripken, Sr. managed the team in 1987 and part of 1988, while his brother, Hall of Famer Cal Ripken was his double play partner, playing shortstop for the Orioles. During the rest of 1988 through part of 1991, Ripken played for manager Frank Robinson, and after that for Johnny Oates, who he was to play for later in 1997.

He had many injuries during his career, going on the disabled list a dozen times. Starting in 1993, when he signed as a free agent with the Texas Rangers, he was no longer an everyday player, getting no more than 203 at-bats in any one season during the last six years of his career.

He was in Texas during 1993 and 1994, along with Jose Canseco, Rafael Palmeiro, Juan Gonzalez, and Ivan Rodriguez, but there should be no question about Ripken taking any steroids - he hit zero home runs in 1993 and 1994 with the Rangers.

Currently, he and brother Cal own Ripken Baseball, a company which owns minor league teams and has made it their mission to teach baseball fundamentals to children around the world.

Probably Ripken's most unusual claim to fame is an error version of the baseball card pictured above, in which the phrase "F*ck Face" was clearly written on the end of his bat. The card also had "white box", "black box", and "scribble" versions, in addition to the infamous "F*ck Face" version. The black box is considered the common card, the white-out is more valuable.