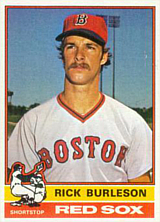 "Some guys didn't like to lose, but Rick got angry if the score was even tied. He was very intense and had the greatest arm of any infielder I had ever seen." - Bill Lee

Rick was the fifth overall selection in the secondary phase of the January 1970 draft by the Sawx. On the retirement of Luis Aparicio, he beat Mario Guerrero for the starting shortstop job in 1974, holding it down until 1980, when he would depart in free agency. A great glove man, Rick was no slouch with the bat either, earning a starting nod at the 1977 All-Star Game while batting .293 with 80 runs scored. He was named team MVP in back to back years (1978 and 1979), making two more All-Star Game trips while winning a Gold Glove in the latter year. He moved to the California Angels as a free agent in 1981 and enjoyed one final full-time, All-Star season, playing 109 games in the strike shortened '81 while hitting .293 and winning his lone Silver Slugger Award. An injury to his throwing arm derailed his career, only appearing in 206 games over his final six seasons, the last spent as a part-time player with the Baltimore Orioles.

Following his playing career, Rick was an Oakland Athletics minor league infield instructor in 1989 and scout in 1990. He was an A's coach in 1991 and a member of the BoSox staff the next two seasons, 1992 and 1993. He was an Angls minor league baserunning instructor in 1994 and a coach for the big leaguers in 1995 and 1996. He later managed the Lancaster JetHawks in 1997 and 1998, the San Bernardino Stampede in 1999, the San Antonio Missions in 2000, the Billings Mustangs from 2001 to 2003, the Louisville Bats in 2004, and Billings again in 2005 and 2006. In 2007, he replaced Pat Kelly as manager of the GCL Reds on July 4th, after Kelly was named bench coach by Cincinnati Reds interim manager, Pete Mackanin. Switching to the minor league system of the Arizona Diamondbacks, Burleson was the hitting coach of the Visalia Oaks in 2008 and moved up to the Triple A Reno Aces in 2009-2012.

Burleson was a 2002 inductee into the Boston Red Sox Hall of Fame.