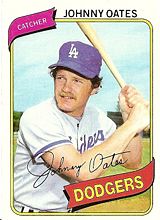 Oates came out of Virginia Tech and played in the minors from 1967 to 1971. He made his major league debut in five games with the Baltimore Orioles at the end of 1970 and returned to play with the Orioles in 1972 as their most frequently used catcher (Andy Etchebarren appeared in slightly fewer games and innings).

After 1976 he was traded to the Los Angeles Dodgers, where he spent 1977 to 1979, gradually getting less playing time as the years progressed. Steve Yeager, Joe Ferguson and Jerry Grote were the other catchers for the Dodgers at the time. He appeared briefly in two World Series for the Dodgers. He closed out his major league playing career with the New York Yankees in 1980 and 1981.

Oates quickly became a manager in the Yankees organization, managing at Nashville and Columbus in 1982 and 1983. He was a coach for the Chicago Cubs from 1984 to 1987. He tmanaged the Rochester Red Wings for a year in the Baltimore organization, 1988, before moving up to become an Orioles coach from 1989 to 1991. Oates was named manager of the Orioles in May 1991, and from 1991 to 2001 managed the Orioles and the Texas Rangers. Seven of his eleven teams played over .500 while he managed them, and in 1996, he became the first man to lead the Texas Rangers to a postseason appearance. For his managerial skill, he was inducted into both the Orioles and Rangers team Hall of Fames. The Rangers retired his #26 in 2005.