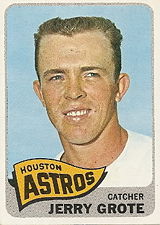 Jerry Grote was usually close to the center of the action in his 16-year career as one of the best defensive catchers of his time. He could also play third base.

Signed by legendary scout Red Murff, when he came up in 1963, he was one of many young phenoms on the Houston Colt .45s. Grote, Joe Morgan, Rusty Staub, Jimmy Wynn, Sonny Jackson, and others were all 21 or younger. After one year as the regular Houston catcher at age 21 in 1964, during which he hit only .181, he was traded to the New York Mets for very little in return (Tom Parsons). The Astros considered they had too many promising young catchers, with Dave Adlesh, John Bateman and Ron Brand already on board, but Grote turned out to be the best of the lot. He played for the Mets for 11 1/2 years, becoming part of their 1969 World Series champion team and their 1973 pennant-winning team. Grote played a major role in the Miracle Mets surge of 1969, where they won 38 of their last 49 regular season games to run away with a division title: Grote hit .458 during the first 17 games of the stretch (11 hits in 24 at-bats), and .268 during the last 32 games.

He became superfluous in New York with the development of John Stearns as the team's starter, and the presence of Ron Hodges as a capable backup. Thus, he was traded to the Los Angeles Dodgers in August 1977 and was on their pennant-winning teams in 1977 and 1978 as the backup to Steve Yeager. After briefly being with the Kansas City Royals in 1981, he came back in September to close out his career with the Dodgers, who won the 1981 World Series, although Grote did not appear in the Series.

He later managed in the minor leagues and was briefly reactivated at the age of 42 with the Birmingham Barons in 1985 when the team was out of healthy backstops. In 1989, Grote played for the St. Lucie Legends of the Senior Professional Baseball Association. He hit .218 with 2 homers and 17 RBI for the club.

He is a member of the New York Mets Hall of Fame. In 1999, he appeared on an episode of Everybody Loves Raymond with several other '69 Mets.