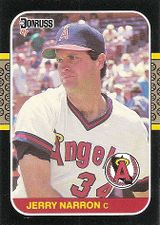 After his playing career ended, catcher Jerry Narron managed in the minors with the 1989 Frederick Keys, 1990-1991 Hagerstown Suns and 1992 Rochester Red Wings. He was a Baltimore Orioles coach under skipper Johnny Oates in 1993 and 1994. He followed Oates to the Texas Rangers in 1995 and replaced him as the club's manager in 2001. After a season and a half at the helm of the Rangers, he was a Boston Red Sox coach in 2003.

Narron joined the Cincinnati Reds staff in 2004 and replaced Dave Miley as manager on June 21, 2005. On July 1, 2007, he was fired, as the Reds skipper after he had led them to a mediocre 31-51 record, good for last place in the NL Central division. He was replaced by Pete Mackanin. In 2011, he was back in the majors as bench coach of the Milwaukee Brewers under new manager Ron Roenicke, staying until the end of the 2015 season.

He coached for the Israeli national team in the 2017 World Baseball Classic Qualifiers. In April 2017 he took over as bench coach of the Arizona Diamondbacks on an interim basis while Ron Gardenhire underwent surgery for prostate cancer. In 2018, after Gardenhire was named as manager of the Detroit Tigers, he succeeded him as bench coach on a permanent basis. In 2020, he joined the Boston Red Sox as bench coach just before spring training, after bench coach Ron Roenicke was named interim manager in the wake of the sign-stealing scandal that had led to manager Alex Cora's firing, but he stayed for only that season.