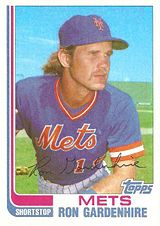 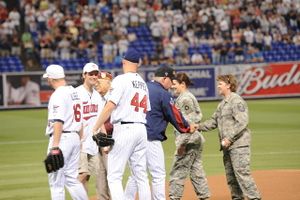 Ron Gardenhire was the skipper of the Minnesota Twins for 13 seasons and has been affiliated with the club since the 1980s.

Gardenhire, a shortstop, was selected by the New York Mets in the sixth round of the 1979 amateur draft and made the Carolina League All-Star team that year in his first pro season. He earned a September call-up with the Mets in 1981, and got his first big league hit on September 11th off future Hall of Famer Bruce Sutter. The next season, 1982 he hit .240 as the Mets regular shortstop.

Gardenhire was traded to the Twins following the 1986 campaign, and after his playing career ended, he made his managerial debut with the Kenosha Twins in 1988. He joined the Twins coaching staff in 1991 and was named the club's manager in 2002. "Gardy" became only the third skipper to start his career with three straight pennant-winning seasons (in his case, the AL Central division title). He added a fourth division title to his resumé in 2006 and fell one game short of winning a fifth in 2008. He then won two more division titles in 2009 and 2010­. He had a lot less success in the post-season, however; after reaching the ALCS in his first year as manager, his teams were eliminated in the first round every year after that.

After never finishing below 3rd place in his first 9 seasons as manager, and falling below .500 only once, he ran into trouble in 2011, when the Twins were decimated by injuries. The team finished in last place with the worst record in the American League. On July 2, 2012, Gardenhire won his 900th game as the Twins' skipper, becoming the second man in franchise history to reach that total, following his predecessor Tom Kelly. On April 5, 2014, he made that 1,000 wins; he was only the tenth manager in history to achieve the total with one team, but still 140 wins behind Kelly, who was one of the other nine men on that exclusive list. He was fired on September 29, 2014, the day after the regular season ended, after a third last-place finish in the last four years.

He was offered a job as an adviser with the Twins, but decided instead to take a year off and spend time with his family before settling on a new occupation. He had not given up on the possibility of managing in the major leagues again. In April 2016, he returned to the Twins as a special adviser to General Manager Terry Ryan, then in 2017, he joined the coaching staff of the Arizona Diamondbacks under new skipper Torey Lovullo as bench coach. However, when he joined the club at the beginning of spring training in February, he announced that he was fighting prostate cancer; the good side of that news was that the condition had been detected early and that his prognosis for a full recovery was excellent. He underwent surgery on April 18th at the Mayo Clinic in Minnesota. Jerry Narron took over for him as bench coach on an interim basis.

On October 20, 2017, he was introduced by the Detroit Tigers as their new manager for the 2018 season, replacing Brad Ausmus. He was on the losing end of his first three games as the Tigers' helm, including being ejected on Opening Day, March 30th for arguing a video review in the 10th inning. Nicholas Castellanos had apparently scored the winning run against the Pittsburgh Pirates and the Tigers were out celebrating on the field when the controversial reversal came in after a protracted examination of the visual evidence. The Tigers went on to lose that game, 13-10, in 13 innings, and then were swept in a doubleheader on April 1st before savoring their first win under Gardenhire on April 2nd, 6-1 over the Kansas City Royals. Overall it was a rough season as the Tigers lost 98 games - but they still managed to finish third in a very weak AL Central division, ahead of the Royals and Chicago White Sox, who both lost 100 or more games. If fans were hoping for the Bengals to begin turning things around in 2019, they were sadly mistaken however, as the pains of being a rebuilding team with relatively few top prospects continued. Worse, the Tigers even managed to get rid at the trading deadline of the few decent major league players they still had, such as Castellanos and reliever Shane Greene. The question now was whether it made any sense for the Tigers to keep an old-timer like Gardenhire at the helm going forward knowing that the main task was to develop young players, not to win, and that the light at the end of the tunnel was at least a couple of years away. The Tigers finished with 114 losses, the morst in the majors, but during the shortened 2020 season, they were playing better and were at one point flirting with .500. On September 19th, however, a couple of hours before they were scheduled to play the Cleveland Indians, Gardenhire announced his retirement, effective immediately. The Tigers had fallen to 21-29 by that point. Veteran coach Lloyd McClendon was designated as interim manager for the remaining games. Gardenhire explained that he had been "stressed out and not feeling well," including missing a couple of games earlier in the month with what described at the time as a stomach virus caused by food poisoning.

He is the father of Toby Gardenhire.