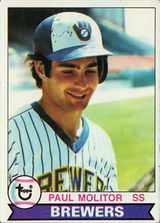 Inducted into Hall of Fame in 2004 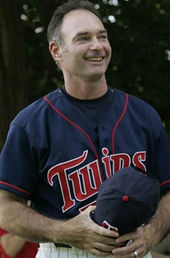 Paul Molitor played twenty-one years in the major leagues, getting over 3,000 hits and achieving a number of other standards typically associated with the Hall of Fame. He is ninth on the all-time list for hits, eleventh for doubles, eighteenth for runs scored and thirty-sixth for stolen bases. Although he never won the MVP Award, he was second in 1993.

Molitor was on Team USA that won the 1975 Intercontinental Cup. He drove in four against Puerto Rico. In the finale, he drew a first-inning walk from Tomoyasu Hagino, stole second and came home on a Ron Hassey double to start a 8-0 US rout of Japan.

He had a 39-game hitting streak in 1987, which is the seventh longest of all time, and the longest since Pete Rose's 44 game streak in 1978. He had 7 consecutive hits in the 1982 World Series, including the first five-hit game ever in a World Series. It would be 29 years until Albert Pujols had the second, in 2011. His career World Series batting average is .418 in 55 at-bats and he was the MVP of the 1993 World Series.

His 3,000th hit was a triple in 1996; he was the first player to ever do so. He is the only player to lead the league in hits the year he reached the 3,000 plateau, finishing the season at 225, 10 more than runner-up Alex Rodriguez. He is third all-time in stealing home among modern players. Jackie Robinson (19) and Rod Carew (17) are the only two players who have more than his 11. He is also third all-time in leadoff home runs, behind Rickey Henderson (72) and Bobby Bonds (35); Molitor hit 33.

While Molitor spent a lot of his playing career as a designated hitter, it was not because he was a poor fielder, but because he had a tendency to injure himself while fielding. He started off as a second baseman with the Milwaukee Brewers, and also spent time as a third baseman and center fielder. His injury issues ended when he became a full-time DH in the 1990s and he also had some of his most productive seasons with the bat in his later years. Overall, he played 1173 games as a DH, 791 at third base, 400 at second base and 197 at first base. When he played in the 1993 World Series with the Toronto Blue Jays, he played some games at first base because manager Cito Gaston wanted to keep his bat in the line-up while playing in the Philadelphia Phillies' ballpark; he benched batting champion John Olerud to do so.

Molitor and Dave Winfield both grew up in St. Paul, MN, were contemporaries and both recorded more than 3000 hits in the major leagues; Molitor replaced Winfield as the Blue Jays' DH in 1993 as both won a World Championship with the Jays, and both played for the Minnesota Twins later in their careers and were elected to the Hall of Fame. He is also linked to another Hall of Famer, Robin Yount, as the two were teammates in Milwaukee from 1978 to 1992.

He was elected to the Baseball Hall of Fame on January 6, 2004 by the Baseball Writers Association of America. Ted Williams remarked that Molitor reminded him of Joe DiMaggio, the best right-handed hitter he'd ever seen.

After his playing days, Molitor was the Minnesota Twin bench coach in 2000 and 2001 and the Seattle Mariners' hitting coach in 2004. In 2011 he was the minor league baserunning coordinator for the Twins. After long-time Twins manager Ron Gardenhire was fired following the 2014 season, he emerged as the favorite to succeed him, and his hiring by the Twins was made official on November 3rd. He had returned to the Twins in 2014, serving as a special coach on Gardenhire's staff. In his first year as manager, he led the Twins to a completely unexpected winning season in 2015, although the team sank back to last place with over 100 losses in 2016. But in 2017, Molitor received a lot of praise for turning the Twins' fortunes around. he had them in early contention for the AL Central title as the Cleveland Indians and Kansas City Royals started slowly, and by the end of July still had the team at the fringes of the wild card race. Top management hesitated for a time about whether or not to make a playoff run, first acquiring another starting pitcher in Jaime Garcia - starting pitching had been the club's main weakness over the first half - but then turning around a week later and dealing away not just Garcia but also closer Brandon Kintzler. The young team could easily have folded, but Molitor rallied them, and they had an excellent month of August, pulling away from the group of teams playing around .500 an vying for the second wild card slot, and then holding on through September to make the postseason for the first time since 2010. They gave the New York Yankees a scare by scoring 3 runs and chasing Luis Severino early in the 1st inning of the Wild Card Game on October 3rd, but neither Ervin Santana nor youngster Jose Berrios could hold off the Yankees' powerful bats, and they eventually lost, 8-4. It was the 13th straight postseason loss in team history - an unenviable record - but they were also the first team to make the postseason after a 100-loss season, so overall, everyone had to be satisfied with how the season had gone. On October 9th, he was signed to a three-year contract extension, and on November 14th, he was named the recipient of the AL Manager of the Year Award. However, the 2018 season was a big disappointment, as the Twins regressed. Even though they still finished in second place in the division, they were never in the running either for first place or a wild card spot, and one day after the end of the season, on October 2nd, Molitor was fired.

After retiring, Molitor admitted to struggles with drug use during the early part of his career.