Inducted into the Hall of Fame in 2009 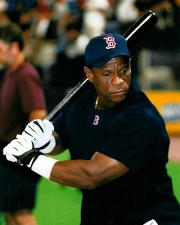 Henderson with the Red Sox

"I always believed I was going to be safe." - Rickey Henderson, on his philosophy of stealing bases

". . . it wasn't until I saw Rickey that I understood what baseball was about. Rickey Henderson is a run, man!" - Mitchell Page

Rickey Henderson felt that the public never properly appreciated him. He tended to talk himself up, and that did not go over well with the sportswriters. However, eventually, his career numbers became so impressive that everyone had to recognize his substantial accomplishments, and when time came to vote on his candidacy for the Hall of Fame, he was elected with overwhelming support on the first ballot. Shortly after his induction in Cooperstown in 2009, the Oakland Athletics retired his uniform number 24. Henderson is widely considered the greatest leadoff hitter of all time.

He showed his promise during his very first season as a rookie in 1979 when he became the youngest player in major league history to steal three bases in one game, doing so on August 23rd. That record held for almost 40 years, as it was only broken by 19-year-old Juan Soto late in the 2018 season. In spite of only making his debut in late June that season, Rickey stole 33 bases, putting him in the top ten in the league for the first of a remarkable 22 times! He hit .274 in 89 games that season, claiming the leadoff slot for the A's that he would not relinquish until being traded the the New York Yankees after the 1984 season. He had his first season of over 100 runs and stole an even 100 bases in 1980 as the offensive leader of a surprisingly competitive Athletics team skippered Billy Martin. 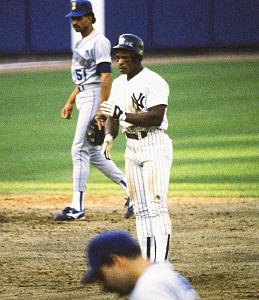 Henderson with the Yankees

Although known primarily for his stolen bases and career totals in runs scored and walks, he also had some power: he was a decent home run hitter with 297 home runs, and he accumulated 510 doubles in his career.

He was the American League Most Valuable Player once, in 1990, and was also second once in the MVP voting and third once.

Statistician Bill James was once asked if he thought Rickey Henderson was a Hall of Famer. James' reply: "If you could split him in two, you'd have two Hall of Famers."

Rickey Henderson played in four different decades. He broke into the American League when Carl Yastrzemski was still active in the league, and finished up in the National League when Miguel Cabrera was a rookie, but he still was not finished with playing baseball: he helped lead the 2005 San Diego Surf Dawgs of the Golden Baseball League to become the league's inaugural champions.

He is known for habitually speaking of himself in the third person.

There is a story that once a team called to ask why his signing bonus check - a very sizable one - hadn't been cashed. The team was concerned there was a problem. They called his agent - whose former job had been towel boy in the A's locker room - and were told that Henderson was waiting for the interest rates to go up before cashing it. Another has him taking his first million dollar check and framing it on the wall - until the team called to tell him he had to cash it first.

Another one: once he saw John Olerud playing first base with a batting helmet and said, "Hey, Rickey used to have a teammate with the Mets who played first with a helmet." Olerud then informed Rickey that they were teammates with the Mets. This story is widespread but false.[1]

Another Henderson story goes that he once missed a game in August with frostbite because he left an ice pack on his foot too long.

When he played for the Mets in 1999 and 2000, he wore #24. What is significant about that is that it was the number worn by the great Willie Mays when he played his two final seasons with the Mets, and while not officially retired, it had not been used since, except for a few games in 1990 when Kelvin Torve was issued the number, apparently because of an oversight. Mays said he was fine with a player of Rickey's accomplishments wearing his number, but reminded folks that late owner Joan Payson had promised not to give the number to anyone after his retirement. Henderson had worn the number in Oakland, in tribute to Mays.

Henderson set records with one or more home runs and one or more stolen bases in each of 25 consecutive years.