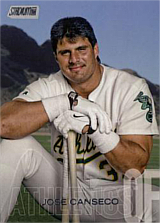 "I've never seen anybody quite like him. He leaves you in awe." - Walt Weiss 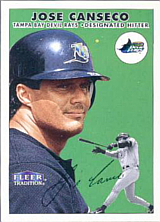 José Canseco was a huge star during his best years, an often-injured slugger in the middle of his career, and the prime symbol of the steroid era later on when he admitted using steroids. A six-time All-Star, he won the 1986 American League Rookie of the Year Award and was the 1988 American League MVP. He played for the Oakland Athletics with his fellow bash brother teammate Mark McGwire and under manager Tony LaRussa for the first half of his career, and then became a journeyman slugger in the second half of his career.

After his playing career, he dabbled in acting and was a cast member of the reality show The Surreal Life. He was also a contestant in an edition of the show Celebrity Apprentice, hosted by billionaire (and future President) Donald Trump. Prior to that, he had appeared in The Simpsons episode "Homer at the Bat". He also authored the 2005 book Juiced in which he admits using steroids and outs teammates that used them with him. While the book was widely derided as full of unfounded rumors at the time, several of the players he fingered where later found to have indeed been PED users.

Canseco also dabbled in martial arts and other combat sports in his retirement. In 2010, he lost a boxing match staged before a minor league game, then in August announced a return to the game as a player-coach with the Laredo Broncos of the independent United Baseball League. He stated he wanted to pitch as well as be a DH with the team. In 2011, he was named manager of the Yuma Scorpions in the North American League.

His twin brother, Ozzie, played briefly in the majors. In 2011, the brothers were both player coaches for the Yuma Scorpions. Even in that relatively low-key occupation, he managed to make national news for his role in a brawl on August 9th. When his third baseman, former major league teammate Tony Phillips, got into a fight with Chico Outlaws manager Mike Marshall, he rushed from the dugout to intervene as the fight degenerated into a bench-clearing brawl. After order was restored, he pulled his team from the field, forfeiting the game, claiming he feared for his players' safety given the high level of tension. Phillips and Marshall were handed three-game suspensions, while Canseco faced a fine for causing the forfeit.

José signed with the Quintana Roo Tigers in the Mexican League in February 2012, hoping to make it back to the bigs. He went 2 for 5 in his first preseason game with the Tigers, then, in a move typical of his personality, refused to submit to a doping test and was suspended by the Liga. He explained that he had been undergoing testosterone treatment for the past five or six years, to counteract a natural deficiency, and that he decided to abstain from the test because he had no guarantees that his medical condition would be taken into account. He added, undeterred, that he still planned to play for a team that season, and that he still had the power to hit "30 to 40 homers" at the major league level if given a chance. However, he had to settle with signing a contract with the Worcester Tornadoes of the Can-Am Association instead.

The next time he made the news was when he filed for personal bankruptcy in the state of Nevada on July 31, 2012. Documents filed on his behalf with the U.S. Bankruptcy Court listed $21,000 in assets and $1.7 million in liabilities, including more than $500,000 owed to the Internal Revenue Service. On May 22, 2013, it was revealed that a woman filed sexual assault charges against him in Las Vegas, to which he replied in a Twitter message that the accusations were entirely made up. The message enraged many observers, as he revealed his accuser's name and workplace in it. He was scheduled to leave Las Vegas to join the Fort Worth Cats in an attempt to return to the playing field. On June 7th, Las Vegas police announced that they had investigated the charges and cleared Canseco; for his part, Canseco said he would sue his alleged victim for making outright and damaging lies. Another appearance on the police blotter took place on October 28, 2014. This time, Canseco accidentally shot himself in the left hand while cleaning his gun in the kitchen of his Las Vegas home, badly damaging a finger.

In 2017, he joined the Oakland A's broadcast team as a pre-game and post-game analyst, a timid return to MLB over 15 years after playing his last game. At the end of the year, he issued a wave of stupid comments on the recent resignations linked to allegations of sexual harassment and other forms of inappropriate conduct directed at women, a development that was likely to cost him any chance of being re-hired, as NBC Sports California and the A's both immediately distanced themselves from him. In July 2018, he announced he signed a contract with World Class Revolution Pro Wrestling, a fledgling wrestling federation, although it was not clear in what capacity he was being hired. In December, he managed to make the news again when he volunteered himself as a candidate to become President Trump's chief of staff, following the resignation of General John Kelly and the difficulty in finding anyone remotely qualified willing to take on the thankless job.