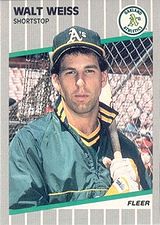 Shortstop Walt Weiss was signed as a 1st round pick in the 1985 amateur draft by the Oakland Athletics and scout Mark Conkin.

In 1988 amidst one of the most unremarkable crops of American League Rookie of the Year contenders in recent memory, Weiss managed to win the award in spite of an OPS+ of only 81, a complete inability to drive in runs, and an even more unremarkable 6 for 31 postseason performance culminating in a .063 batting average in the 1988 World Series. What appealed to voters was his ability to play a key defensive position everyday for the pennant-winning Oakland Athletics.

After his 14-year playing career, Weiss was a special assistant to Colorado Rockies GM Dan O'Dowd from 2002 to 2008. He then turned to coaching at the high school level, at Regis Jesuit High School in the Denver, CO suburbs. On November 7, 2012, he was plucked from the high school ranks to be named the manager of the Rockies for 2013.

He underwent an emergency appendectomy on May 13, 2015, after complaining of stomach pains for a couple of days. Bench coach Tom Runnells took over for him on an interim basis while he was recovering. After four years of managing the Rockies without a winning record, he was not offered a new contract when his deal expired after the 2016 season. In 2018, he was named bench coach of the Atlanta Braves.