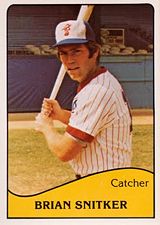 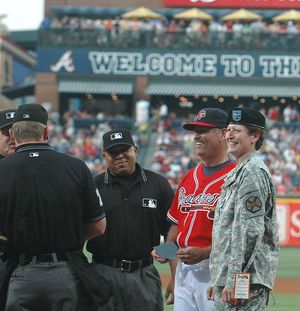 Snitker with MLB umpires and an Army soldier in 2007

Brian Snitker has been affiliated with the Atlanta Braves for 40 years. A catcher, he played in the team's farm system from 1977 to 1980. After retiring as a player, he was a longtime coach and manager in the Braves organization. He was also the Braves bullpen coach in 1985 and again from 1988 to 1990. In 1991 he returned to the minors as a coach with the Macon Braves. He managed Macon in 1992 before moving back to the coaching ranks with the Greenville Braves for the 1993 and 1994 seasons. Snitker was named Atlanta's third base coach beginning in 2007 season. He held the position until the 2013 season, then was succeeded by Doug Dascenzo.

After managing the Braves' AAA affiliate, the Gwinnett Braves, starting in 2014, he was appointed interim manager of the major league Braves on May 17, 2016, following the firing of Fredi Gonzalez. On October 11th the interim label was removed, the result of the Braves playing quite well under Snitker in the second half of the season. At age 61 at the start of the 2017 season, he was the 5th-oldest rookie manager in major league history. The Braves had a so-so season as they continued their rebuilding that year, but in 2018 confounded everyone by breaking through for a division title. Snitker received considerable praise for his excellent work in working numerous young players into the starting line-up and turning the Braves into contenders well ahead of schedule and he was voted the National League Manager of the Year in recognition of his good work.

His son Troy Snitker has been a minor league player and a major league coach. The two were on opposite sides in the 2021 World Series, with Troy coaching for the Houston Astros.