Doug Dascenzo was an outfielder who played seven seasons in the big leagues, mostly with the Chicago Cubs. He was on the division-winning 1989 team, but had most of his at-bats in the period 1990-1992. His highest batting average was .255, and he usually added some stolen bases to the mix. He pitched in four ballgames, with an ERA of 0.00, briefly earning the nickname "The Terminator" for his pitching performances. A defensive specialist, at one time he held the record for most consecutive games played as an outfielder without an error. Many (possibly most) of his games were just a few innings long when he came in as a defensive replacement. 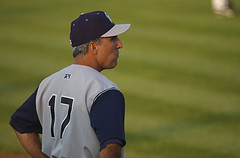 Once, a Chicago newspaper at the season's all-star break asked the players on both local teams to give themselves a grade based on how they played so far on the year. Dascenzo gave himself an A+. He may have been the only player on either team to do so. He said he was doing exactly what the team wanted him to do. He once laid down a bunt single against Rob Dibble, causing the angry Dibble to whip the ball at Dascenzo's back as he ran to first. Dibble received a suspension for that.

He was at Oklahoma State University at the same time as Pete Incaviglia.

Dascenzo was a coach for the Mobile BayBears in 1998. He spent 1999-2005 as the San Diego Padres' minor league Outfield/Baserunning Instructor, then 2006 as manager of the Eugene Emeralds of the Northwest League before being promoted to the Fort Wayne Wizards of the Midwest League after the season. In 2014, he was appointed third base coach of the Atlanta Braves and in 2015, he moved to the Cubs. He was first named to be the first base coach, but when new manager Joe Maddon hired Dave Martinez to be his bench coach, it provoked a game of musical chairs within the coaching staff, and Dascenzo ended up as an outfield and baserunning coordinator for both the major league team and its minor league affiliates.

His son, Zachary Dascenzo, was drafted in the 2008 amateur draft.