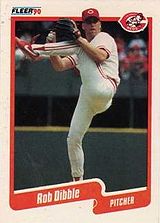 Pitcher Rob Dibble was signed as a 1st round pick in the secondary phase of the 1983 amateur draft by the Cincinnati Reds and scout Mickey White.

Along with Randy Myers and Norm Charlton, Dibble was part of the Reds' "Nasty Boys" bullpen trio in 1990 and 1991. He threw a fastball that sometimes reached 100 miles per hour and a slider that came in at around 90 miles per hour. In 1989, he set a major league record by averaging 12.8 strikeouts per nine innings. He surpassed his own record two years later with 13.5 and again in 1992 with 14.1. A broken bone in his left forearm lost him five weeks of the 1993 season. He was ineffective that season, more than doubling his ERA from the previous year. Also in '93, he attended a Megadeth concert during which he suffered a ruptured eardrum.

He had arthroscopic surgery on his pitching Shoulder in April of 1994 and made six rehab appearances (five starts) for the AA Indianapolis Indians that year, posting a whopping 22.85 ERA. He then went to the Chicago White Sox organization in 1995, being called up to the big club in May. No longer asked to close ball games, he appeared in 16 contests for the Pale Hose, but his ERA remained high at 6.28; he was released on July 17th. The Milwaukee Brewers picked him up on July 31st and assigned him to the AAA New Orleans Zephyrs. He was called up to the big club and pitched his first game in Milwaukee on August 9th, but he was even worse in Milwaukee than he had been in Chicago, putting up an 8.25 ERA in 15 games. During the off-season, the Chicago Cubs signed him to a deal, but he left camp March 26, 1996 (the very same day former teammate Tom Browning announced his retirement), saying he needed to take time off because of the plethora of pitching coaches he had gone through the previous few seasons giving him different advice. That spring, he had ERA of 24.55 in 3 2/3 innings with two losses. The Florida Marlins signed him to a minor league contract on April 14th but he never pitched in their system. Marlins pitching coach Larry Rothschild theorized that the eardrum rupture may have affected his balance. Indeed, his ineffectiveness on the mound was sudden, occurred after the concert and at the relatively young age of 29.

He later worked on the "Best Damn Sports Show" on Fox-TV, as well as hosting an afternoon talk show with Kevin Kennedy on XM Satellite Radio Channel 175. He also served as a color analyst for Washington Nationals broadcasts on MASN television Network in Washington, DC. He was fired in August 2010 when he said on air that super prospect Stephen Strasburg should just "suck it up" when he complained about elbow pain; it turned out, of course, that the issue was serious and that the young star needed Tommy John surgery. In June of 2012, Dibble was named head coach of Calabasas High School located north of Los Angeles, CA in the San Fernando Valley.

Dibble holds the single-season record for saves by a player who did not lead his team. In 1992 he saved 25 games for the Reds, while Norm Charlton saved 26.