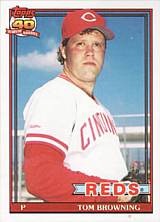 “I couldn’t rely on natural talent — because I didn’t have much of it. I wasn’t the hardest thrower, the fastest runner, or the most gifted athlete. But I had a solid and durable arm, and I worked hard.” - Tom Browning, from Tom Browning's Tales From The Reds Dugout

Tom Browning pitched the twelfth perfect game in MLB history against the Los Angeles Dodgers on September 16, 1988 [1]. Additionally, he came close to adding another perfecto in 1989, taking a bid into the 9th inning against the Philadelphia Phillies on the Fourth of July, only for Dickie Thon to break it up with a lead-off hit in the 9th. Browning also had another no-hit bid broken up in June 1988 by Tony Gwynn of the San Diego Padres with one out in the 9th inning.

Following his All-Star 1991 season, Tom began to battle injuries. On May 9, 1994, he broke his arm while delivering a pitch to Archi Cianfrocco which ended his season. He tried to come back in 1995 with the Kansas City Royals, but appeared in only two games before shutting himself down for the season for further rehab. He was in spring training with the Royals again in 1996, but retired before camp broke. In twelve seasons, Tom was 123-90 with a 3.94 ERA

Tom was inducted into the Cincinnati Reds Hall of Fame in 2006. He is the co-author of Tom Browning's Tales From The Reds Dugout with Dann Stupp.