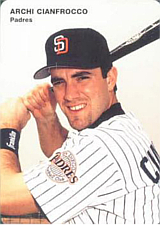 Archi Cianfrocco was an all-purpose utility player during his seven years in the major leagues. He played every position except center field and pitcher. Of his 500 games, he had 235 at first base, 185 at third base, and did everything but pitch. On July 21, 1995, he had a banner day with 6 RBI, becoming the first player since at least 1914 (and only player through the 2019 season) with 6 RBI in a 9-inning or shortened game in which a player entered the game in the 7th inning or later. He entered in the 8th inning, hitting a pinch-hit grand slam off Steve Bedrosian to give the San Diego Padres a 4-2 lead. He added a two-run single in the 9th off Mike Stanton to beat the Atlanta Braves, 9-6.

Archi hit .300 in the minors in 1992, 1994, and 1995, each season of which he also was in the majors. Originally a member of the Montreal Expos, he came to the San Diego Padres in 1993, playing the remainder of his big league career out west. Archi's Padre fan clubs included Archi's Army and the CianfrocCrew. After the 1998 season, he headed to Japan, playing one year with the Seibu Lions of NPB. An extensive review of Archi's career appears here: Archi Cianfrocco