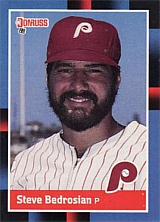 After attending the University of New Haven, Bedrosian was drafted by the Atlanta Braves in the third round of the 1978 amateur draft. Primarily a starter in the minors, he quickly rose through the Braves chain and, with the AAA Richmond Braves in 1981, he posted a 2.69 ERA, second to Bob Ojeda in the International League. He earned a late season call-up to Atlanta that year, starting one game and appearing in 14 more out of the bullpen. He was with Atlanta for good in 1982, primarily pitching out of the pen but making several spot starts. In 64 outings, he won 8 games and saved 11 while recording a 2.42 ERA, as the Braves won the NL West crown. The following summer, he saved 19 games while splitting closing duties with Terry Forster and, in 1984, he saved 11 while sharing the role with Donnie Moore and Gene Garber. After that season, the Braves signed free agent Bruce Sutter, and Bedrosian was moved to the rotation. As a starter, he went 7-15 with a 3.83 ERA in 37 appearances. Following the season, he was traded to the Philadelphia Phillies.

The Phillies immediately moved Bedrosian back to the bullpen, and he saved 29 games as the club's closer in 1986. On September 23, in a game against the Pittsburgh Pirates, he took the loss after giving up Barry Bonds' first career walk-off home run. The next summer, he was even better, saving a National League-leading 40 games, making a trip to the 1987 All-Star Game and winning the Cy Young Award despite the fact that his team finished in fifth place. He missed a month the following year but still managed to finish the 1988 campaign with 28 saves, fourth best in the NL. In June 1989, Bedrosian was dealt to the San Francisco Giants, and between the Phillies and Giants, he saved 23 games that summer. In the NLCS, he appeared in 4 games and recorded 3 saves as the Giants knocked off the Chicago Cubs, but the club went on to get swept by the Oakland Athletics in the World Series. He saved 17 games for San Francisco in 1990 before being sent to the Minnesota Twins after the season. He saved only 6 games in 56 appearances for the Twins, but the team won the 1991 World Series, defeating the Braves. Following the 1991 campaign, Bedrosian began to suffer numbness in his fingertips and was forced to retire. However, his condition improved and he was able to return to baseball with the Braves in 1993. He recorded a 1.63 ERA in 49 games for the team and went on to pitch two more years before retiring for good.

After his career ended, Bedrosian was elected to the Coweta County Board of Education in Georgia, on which he still serves as of 2010. His son, Cam Bedrosian, was a first round pick of the Los Angeles Angels of Anaheim in the 2010 amateur draft and made his major league debut in 2014.

Bedrosian was referenced on the "A Very Sunny Christmas" episode of FX/FXX sitcom It's Always Sunny In Philadelphia. The character Mac, played by Rob McElhenney, lists Bedrosian, Von Hayes and Mike Schmidt as current Philly baseball legends who toy stores would clearly hide the hot toys for while trying to buy a big ticket Christmas gift.