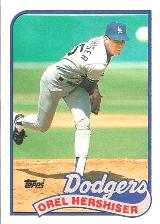 Orel Hershiser was signed as a 17th round pick in the 1979 amateur draft by the Los Angeles Dodgers and scout Boyd Bartley. In the minors Hershiser was more of a reliever, accumulating 51 saves in 202 games before establishing himself as a starter in the majors.

Hershiser was one of baseball's biggest stars who pitched 18 years in the major leagues, winning 204 games. Thirteen of his seasons were with the Dodgers, and three were with the Cleveland Indians. He had at least one season where he won in double figures for each of the four teams for which he pitched. He won the Cy Young Award in 1988, when he pitched for the Los Angeles Dodgers who won the 1988 World Series over the Oakland A's, where Hershiser won two games and batted 1.000. That year, he pitched 59 consecutive scoreless innings. During the streak, Hershiser allowed 30 hits, walked nine and struck out 34. A controversial call in his second-to-last start against the San Francisco Giants preserved the streak. His streak ended in the first inning of his first start of 1989.

He also pitched in the 1995 World Series and the 1997 World Series with Cleveland, and was in post-season play with the New York Mets in the one season he was with them, 1999. In his first start as a member of the San Francisco Giants, in 1998, he threw eight shutout innings against the Chicago Cubs. Hershisher was the first pitcher to start his postseason career 7-0; Orlando Hernández later topped that at 8-0.

A three-time All-Star, he won a single Gold Glove in 1988. He never led the league in ERA, but was in the top 3 in the league 5 times.

In 2006, his first year of eligibility for the Hall of Fame, he received 11% of the vote. However, in 2007 he fell a bit under 5% during a crowded year, and was dropped from the ballot.

When Hershiser was a young major league pitcher, he gave credit to Sandy Koufax for helping him. Hershiser's minor league career was decent but not that impressive, as he went 35-29 from 1979-1983, and only once was his ERA under 3.50. However, not long after he broke into the majors, he went 19-3 in 1985, establishing himself as a star. His manager, Tommy Lasorda, gave him his nickname "Bulldog" in an effort to harden what he thought was a fairly soft Hershiser psyche.

Hershisher had career 2014 strikeouts in the majors. Based on similarity scores, the most similar player to Hershiser is his teammate Bob Welch. They were on opposing teams in the 1988 World Series, but did not pitch against each other. Welch, in his first year of eligibility for the Hall of Fame, received less than 1% of the vote. In 2017, he was placed on the Veterans Committee ballot looking at players and executives from "Today's Game" era. He received less than 5 votes, and was considered again in 2019.

Hershiser was a Texas Rangers coach from 2002 to 2005. An ESPN analyst in 2006, he was invited to interview during November 2006 for the position as manager of the Oakland Athletics.

He found an interest in poker in 2006, and played in a few big-time tournaments. Hershiser reached the quarter finals of the 2008 National Heads-Up Championships and won $75,000 in prize money. He is also known to show up on PokerStars.net using the screen name "O. Hershiser".

His brother, pitcher Gordie Hershiser, played in the minors in the 1980s. Orel's son, Jordan Hershiser, began his pro career in the Dodgers chain in 2012.

He was the second pitcher to announce "I'm going to Disney World", as part of a commercial pitch, very shortly after winning the World Series.