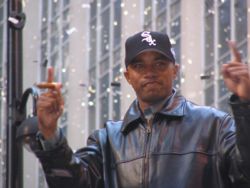 Orlando Hernández last pitched at age 41 in the majors for the New York Mets in 2007. The all-time Cuban leader in winning percentage at the time of his leaving that country, Hernández also pitched for the New York Yankees, the Chicago White Sox, and the Arizona Diamondbacks. He was one of the most famous and successful Cuban defectors to play baseball in America. In the U.S., he pitched well in the regular season and earned a 12-3 record and 2.55 ERA in 19 postseason appearances. He is the son of Arnaldo Hernández Sr., half-brother of pitcher Liván Hernández and the brother of Arnaldo Hernández Jr. He got his number (26) and nickname from his father.

Hernández led the 1988 Selective Season with a 3.18 ERA. In the 1988 Baseball World Cup, Hernández was 1-0 with a 5.19 ERA; the only less effective pitcher on the Cuban national team in the Cup was another future major leaguer, Rene Arocha. The team won the Gold in a close battle with Team USA. In the 1988-1989 National Series, El Duque was 7-0 for the Industriales. His 10-1 winning percentage in the 1990 Selective Series led the way. On April 7, he threw a 7-inning no-hitter.

Hernández returned to the Cuban national team for the 1990 Goodwill Games (Gold Medal) and the 1990 Baseball World Cup, in which he struck out four in two scoreless innings of relief in a minor role. In the 1992 Selective Series, Orlando led in wins (10), winning percentage (he only lost twice) and ERA (2.23) in his best year in Cuba. He pitched for Cuba in the 1992 Olympics and was 1-0 with a 5.40 ERA, the highest on the Gold Medalists. He struck out 9 and allowed one run in 6 1/3 IP against Taiwan but was blown out of the box by Team USA, allowing five runs in a 1/3 of an inning, thanks in part to a 3-run shot by Michael Tucker. Omar Ajete relieved him and allowed just one run the rest of the way in beating the US.

El Duque was 1-0 with a 0.00 ERA in the 1993 Central American Games. In the 1993 Intercontinental Cup, he was 1-0 with a 2.00 ERA and 17 K in 13 innings. He had the second-highest ERA on the gold medal winners. He allowed 3 hits and one run while fanning 12 in a complete game against the Nicaraguan national team but allowed two runs in four innings to Australia.

In the 1993-1994 National Series, Orlando led with 11 wins for the Industrailes. It was his third time leading a Cuban league in wins. In the 1994 Baseball World Cup, Hernández was 1-0 with a 1.50 ERA in three games as a teammate of his half-brother.

Orlando tied four others for the shutout lead (3) in the 1994-1995 National Series. He made his final appearances with the national team that year, going 2-0 (0.00 ERA) in the 1995 Pan American Games and 2-0 with a team-high 4.00 ERA in the 1995 Intercontinental Cup. He got the win against Nicaragua in the semifinals despite 2 runs in 2 innings in a 7-6 squeaker and allowed two runs and fanned 13 in 7 innings in a victory over the Dutch national team.

Hernández was suspended from Cuban play after his half-brother Liván left the island. He then got into trouble in 1996 for allegedly accepting a cash gift from a scout with MLB ties. He was "banned for life" that October along with Germán Mesa and Alberto Hernández; Mesa would later be reinstated. While suspended, Orlando worked at a mental hospital, doing menial labor.

Hernández left Cuba in December of 1997. His agent Joe Cubas put out a story that Orlando had fled on a leaky raft, facing rough weather. In fact, he had gone on a 20' fishing trawler with a 6-cylinder engine. Among his companions was Alberto Hernandez, who had been suspended at the same time as him. He was detained in the Bahamas. Cubas chartered a Lear jet to take El Duque to New York. Cubas also supplied his signee with a younger birthdate to go with the false escape story, even though Orlando's birthdate was clearly recorded in official Cuban sources. Cubas's lies would come to light in a story by Sports Illustrated writers Jon Wertheim and Don Yaeger.

He became a free agent and signed a four-year contract with the New York Yankees. Hernandez began the 1998 season in the minor leagues but found his way into the Yankees rotation by mid-summer. In the minors, he pitched for the Tampa Yankees (1-1, 1.00, 15 K, 3 H in 9 IP) and the Columbus Clippers (6-0, 3.83, 59 K in 42 1/3 IP). The Cuban went 12-4 with a 3.13 ERA in his first major league season. Fans fell in love with his high socks and big leg kick. He posted a 2-0 record in the 1998 Postseason, giving up just one run in 14 innings. Overall, he had won 21 games his first year in the USA. Hernández finished third in the 1998 AL in winning percentage behind David Wells and Roger Clemens and was 4th in voting for the 1998 American League Rookie of the Year Award - trailing another Cuban, Rolando Arrojo. He was on the Baseball Digest Rookie All-Star Team. When Hernández started game two of the 1998 World Series, he was the sixth-oldest MLB rookie to start a World Series game.

Injuries began to bite in 2001. "El Duque" was limited to just 16 starts and won only four games against 7 losses while his ERA+ fell to 92. He went 1-1 during the 2001 Postseason. He went 8-5 in 2002, but for the first time in his major league career, Hernandez failed to win a playoff game, losing to the Angels in the ALDS.

Hernández was traded to the Chicago White Sox for Antonio Osuna and Delvis Lantigua in January but the same day was sent to the Montréal Expos with Rocky Biddle, Jeff Liefer and cash for Bartolo Colon and Jorge Nunez. He had arthroscopic surgery for a partially torn rotator cuff and missed all of the 2003 season, prompting the Expos to acquire his half-brother, Livan, to fill the gap left by his absence.

A free agent, Orlando returned to the Yankees. Due to a back problem, he pitched mainly in the second half of the season and went 8-2 with a 3.30 ERA. He recorded a no-decision in one playoff start.

The Chicago White Sox gave Hernández a two-year contract prior to the 2005 season. He started off strong, but tapered in the second half, finishing 9-9 with a 5.12 ERA (87 ERA+). Manager Ozzie Guillen moved Hernandez to the bullpen for the postseason. It was a good move. "El Duque" helped the White Sox escape a bases loaded, nobody out jam in Game 3 of the ALDS. He also pitched well in relief during Game 3 of the World Series against the Houston Astros.

The White Sox traded Hernández to the Arizona Diamondbacks with Luis Vizcaino and Chris Young in return for Javier Vazquez before the 2006 season. He struggled with the Diamondbacks, going 2-4 with a 6.11 ERA, and was traded to the New York Mets for Jorge Julio. Hernandez turned around his season, winning 9 games with New York (against 7 losses with a 4.09 ERA), helping the team to reach the playoffs for the first time since 2000. Right-handed batters hit .199 against him that year. While running in the outfield before the NLDS, he suffered a tear in the right calf and did not play in the postseason; Oliver Perez took his spot.

Overall, Hernández was 216-112 between the Cuban and US leagues.