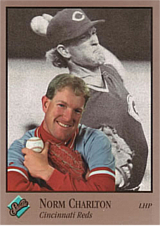 "I like his composure. He shows a lot of confidence out there." - Roger Craig 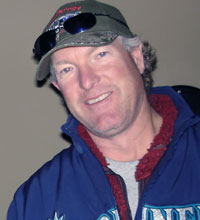 Fiery left-hander Norm Charlton pitched 13 seasons in the major leagues, racking up 97 saves and 51 wins. A strikeout artist with considerable speed, he threw a mid-90s fastball, a curveball, and a forkball, and had a major league career strikeouts per nine innings ratio of 8.1. In his peak year, 1993, his K/9 was 12.5. A 1992 National League All-Star, he's best remembered as part of the Cincinnati Reds "Nasty Boys" relief triumvirate, with Rob Dibble and Randy Myers, that was instrumental in the club's 1990 world championship.

The winningest major league pitcher out of Rice University, Charlton was selected by the Montreal Expos in the supplemental first round of the 1984 amateur draft and signed by scouts Red Murff and Roy McMillan. He was regrettably dealt to the Cincinnati Reds for an end-of-the-line Wayne Krenchicki prior to the 1986 season and made his big league debut in the Reds' rotation in 1988, making 10 starts with a 4-5, 3.96 record. He was moved to the bullpen in 1989 to inspiring results, posting ERAs under 3 in the next four seasons. He became the best of pals with Rob Dibble, the two and Randy Myers mowing down hitters as part of Cincinnati's three-headed bullpen attack. While the pals are often remembered together because they both had high K/9 ratios, Charlton lasted 13 seasons and 900 innings while Dibble burned out after 7 years and less than 500 innings. Norm won 12 games as a reliever and spot starter in 1990, striking out 117 in 156 1/3 innings as his team won the NL West. In the NLCS, he took the loss in Game 1 against the Pittsburgh Pirates but came back and did not allow a run in three more outings as the Reds reached the World Series. He pitched one inning in the Series as Cincinnati swept the Oakland Athletics.

With the departure of Myers and Rob's decline beginning in 1992, Norm took over as the team's closer, saving 26 games and striking out 90 in 81 1/3 innings, making his lone All-Star team. But the Reds felt they were lacking offensively and it was time to peddle Norm, off to the Seattle Mariners for Kevin Mitchell before the 1993 season. He was strong in 34 games, recording 18 saves with a 1-3 record and a 2.34 ERA and 49 strikeouts before his arm gave out, necessitating Tommy John surgery. After missing the entirety of 1994, he came back with the Philadelphia Phillies in 1995 and struggled to a 7.36 ERA in 25 games before being released on July 10th. In search of a closer, the Mariners signed him back, making Norm a key component of another memorable 1990s club, the Mariners club that saved baseball in Seattle. He posted a 1.51 ERA and 14 saves in 30 games with the M's in 1995, striking out 14 men in 13 1/3 postseason innings before Seattle bowed to the Cleveland Indians in the ALCS.

In 1996, Norm saved 20 games but with a 4.04 ERA, sharing closing duties with Mike Jackson. He fell apart in 1997; splitting the closer's job with the erratic Bobby Ayala, he went 3-8 with 14 saves and a 7.27 ERA, eventually losing the closer's job outright by mid-season. He began 1998 with the Baltimore Orioles, setting up for Armando Benitez, but struggled again, going 2-1 with a 6.94 ERA before his release on July 28th. He was picked up by the Atlanta Braves on August 5th, subsequently appearing in 13 games with a 1.38 ERA. He pitched with the Tampa Bay Devil Rays in 1999, appearing in 42 games, finishing 9, and going 2-3 with no saves and a 4.42 ERA. He was released at the end of spring training in 2000 and picked up by the Reds, his old homestead, on April 9th. Unfortunately, his 2 games were disastrous: in 3 innings of work, he surrendered 6 hits, 6 walks, 9 runs (all earned), a home run, a wild pitch, while only striking out one batter. This performance earned his third mid-season release in five years, but this time, no other club picked him up. His career appeared finished.

He was in camp with the M's once again as a non-roster invitee in 2001. He and Ryan Franklin were battling for the final roster spot and the competition went down to the wire, with both pitching very well. It looked as if Franklin was going to win, but Paul Abbott was placed on the disabled list, allowing Charlton a spot on the 25-man roster. He appeared in 44 games as a middle reliever and lefty specialist, going 4-2 with a 3.02 ERA and a save for a Mariner club that won 116 games. Following 3 1/3 scoreless postseason innings, he called it a career.

Starting in 2003, Charlton was a minor league coach in the Seattle organization. He was appointed the big club's bullpen coach for 2008 but was let go following the year in favor of John Wetteland. As of 2011, he ran a charter fishing trip operation in Texas.