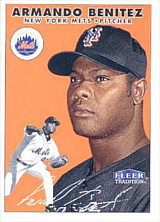 Coming to the game at 14 years of age, Armando signed as an amateur free agent with the Baltimore Orioles in 1990. He reached the big leagues in 1994 spending his first three seasons as more of a middle relief weapon. It was Armando who surrendered the home run to Derek Jeter in Game 1 of the 1996 ALCS that Jeffrey Maier reeled in. He broke out as Randy Myers primary set-up option in 1997, taking his first spin in the closer's chair in 1998 with 22 saves in 71 appearances. Prior to the 1999 season, a three-team deal landed Armando in Queens to pitch for the New York Mets. He was expected to set up Mets closer John Franco but an injury opened the door for him, saving another 22 games with a minuscule 1.85 ERA. Armando ultimately took the job from Franco and saved 138 games in the next three and a half seasons, earning the Rolaids Relief Man hardware on the strength of 43 saves in 2001. But he struggled late in seasons and especially the postseason with putting on baserunners, fraying Mets fans' nerves tight and late including and not limited to blowing a lead in Game 1 of the Subway Series to the arch-rival New York Yankees in 2000, a game and series the Mets would lose. As Armando's ability to convert saves in 2003 eroded (despite this, he made his first All-Star appearance), he was acquired by the Yanks in a deadline deal to set up the great Mariano Rivera.

Even with a 1.93 ERA in 9 1/3 Yankee innings Armando would be flipped again, to the Seattle Mariners in a post-deadline deal as his propensity for piling up baserunners made the Yankees nervous. He joined the Florida Marlins on a challenge free agent pact, taking a pay cut on a one-year deal that proved to be his best as a big leaguer. In 64 appearances, Armando racked up 47 saves while posting a career best 1.29 ERA. From April to June, he enjoyed a 30-inning scoreless streak. He made his second All-Star appearance with the Fish and was rewarded in the off-season with a three-year, $21 million deal from the San Francisco Giants. And just like that, the good times were over. Armando was never able to recapture that 2004 magic. He was injured in April of his maiden Giant voyage, tearing tendons in his right hamstring that sidelined him to August, returning for only 19 saves and a 4.50 ERA in 2005. He only logged 17 saves in 2006 in 25 opportunities, ending the season early due to arthritis in both knees. After a string of bad outings in 2007, he was unloaded on the Marlins where his ERA ballooned to 5.73. He made 8 final big league appearances with the Toronto Blue Jays in 2008. After logging a 5.68 ERA, he was designated for assignment in June and released. He caught on in various minor league chains and finished his career on the Long Island Ducks of the Atlantic League in 2012.

Overall, he saved 289 big league games, ranking 31st all-time while falling short of the "milestone" 300 save marker. In 779 innings, he struck out 946 hitters while walking 403. He also holds a curious place in baseball history as the only living player (3 deceased) with a share of the record for most career RBI (2) without reaching base safely (8 AB, 0 Hits, 0 BB, 0 HBP). In his first year of eligibility for the Hall of Fame, in 2014, he received a single vote and dropped off the ballot.