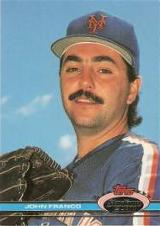 John Franco, a Brooklyn native, was traded to the New York Mets on December 6, 1989 by the Cincinnati Reds with Don Brown for Randy Myers and Kip Gross. He was a high school teammate of Benny Distefano, who never got a hit off him in the majors.

Franco made an immediate impact for the Mets, saving a National League-leading 33 games in 1990. John earned a spot on the NL All-Star team and was the NL Rolaids Relief Award winner for his performance. Despite pitching for some very bad Met teams in the 1990s, Franco was consistently one of the few bright spots on the team, saving 20 or more seven times from 1990 until 1998.

John remained the Mets' closer until the middle of 1999 when a finger injury put him on the shelf for two months. During that time, Armando Benitez took over the reins as the Mets closer, pushing Franco to a setup role. In 2000, for the first time in nearly 15 years, the Mets made it to the World Series. Franco picked up the Mets' only win of the series with a shutout 8th inning in Game 3 against the cross-town New York Yankees. Very popular with both fans and teammates, he was named the Mets' captain in 2001, the third player to hold the title.

In 2002, John missed the entire season due to Tommy John surgery. At the age of 42, many believed the lefty's career was over. Franco came back the next year (2003) and posted a 2.62 era in 38 appearances. After the 2004 season the Mets and Franco parted ways, ending his 15-season tenure with the team. Franco left as the team's all time leader in appearances (695) and saves (276).

Franco played the 2005 season with the Houston Astros and retired after being released on July 2nd. He ended his career with 1,119 games pitched - the second highest total ever, and 424 saves, placing him third on the all-time list, and first among left-handers.

Franco's son J.J. Franco has been an infielder in the minor leagues since 2014. In 2019, John was appointed a baseball operations adviser by the New York Mets. He had been a club ambassador for the Mets since 2010.