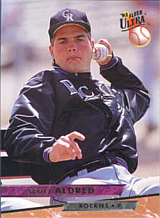 Scott Aldred was signed by the Detroit Tigers and scout Bill Schudlich as a 16th round pick in the 1986 amateur draft. A pitcher in parts of nine seasons, Aldred once held the all-time single-season record for most games without a decision (Win, Loss or Save) in a season, with 48 games for the spanking new Tampa Bay Devil Rays in 1998. In 2007, Trever Miller shattered the record, pitching 76 games with the Houston Astros without being involved in the decision. He was a member of two expansion teams - the Colorado Rockies in 1993 and the Devil Rays in 1998. In 1999, pitching for the Philadelphia Phillies, he did not allow a hit in his first 11 appearances, tying a record held by John Franco of the 1987 Cincinnati Reds; it was matched by Justin Wilson in 2017, and then broken by Josh Hader in 2020. In his case, they were not his first 11 appearances of the season, as he had started the year with the Devil Rays, making 37 appearances; the record was for his first games in the National League with the Phils.

He was a starter in his first three seasons with Detroit, from 1990 to 1992, and again in 1996 and 1997 with the Tigers and Minnesota Twins, but had only limited success in the role, going 14-31 over those five seasons. He spent the rest of his career as a LOOGY and was somewhat more effective in that role, with a 7-7 record and 1 save. Walks were a bugaboo throughout his career, with 230 in just under 500 innings.