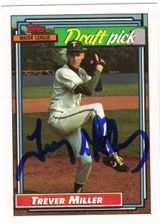 Trever Miller was signed as a supplemental 1st round pick in the 1991 amateur draft by the Detroit Tigers.

Miller holds the record for most appearances in a season without receiving a decision (win or loss) at 76, which he accomplished in 2007 with the Houston Astros. The previous record was only 48, by Scott Aldred in 1998.

This formed part of a record streak of 121 games without a win or loss: the previous record was 116 games by Bobby Seay between 2001 and 2007 (including a lot of time out of the major leagues).