Note: This page is for the major league Miami Marlins. For minor league teams which have played under that name, click here 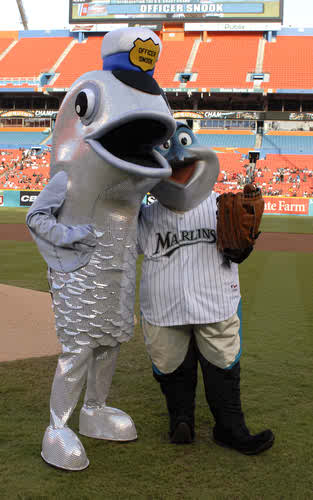 The Miami Marlins are a National League team that began play in 1993 as the Florida Marlins following an expansion (see Expansion of 1993). They changed their name in 2012 when they moved to a new ballpark in downtown Miami, FL, resurrecting a name that had been used by minor league teams in the past. The change of name was a condition imposed by the city in return for helping to finance the new playing facility.

The Marlins' first selection in the expansion draft was outfielder Nigel Wilson of the Toronto Blue Jays. Led by manager Rene Lachemann and star outfielder Gary Sheffield, the club struggled in its first few seasons, as expected, but began to build a decent foundation. Lachemann was fired in 1996 and owner Wayne Huizenga began to splurge on free agent signings.

Jim Leyland took over as manager in 1997 and armed with a pitching staff of Kevin Brown, Al Leiter, and Alex Fernandez, and a team boosted by a number of high-priced veterans, led the Marlins to the wild card. The team upset the Atlanta Braves in the National League Championship Series and went on to defeat the Cleveland Indians in an exciting seven-game World Series.

After winning the world championship, owner Huizenga decided to dismantle his club in what would become known as the first great Marlins fire sale. Within a couple of years, virtually every star of the 1997 club was gone, and in fact the 1998 edition of the team set a record for most losses by a defending World Series champion. The roller-coaster experience left a bitter taste in the mouths of fans and observers. Performance and attendance suffered, and Huizenga sold the team to John Henry. In 2002, Henry in turn sold the team to Jeffrey Loria as part of a game of musical chairs that landed him the Boston Red Sox, and made the Montreal Expos wards of Major League Baseball. The team's fortunes began to improve, especially as Loria brought with him the Expos' coaching staff, spring training complex and scouts. During the 2003 season, manager Jeff Torborg was replaced with Jack McKeon. Players responded to the change, and McKeon led the club to another wild card. After upsetting the San Francisco Giants in the Division Series, they beat the Chicago Cubs in the League Championship Series in a series remembered for the Steve Bartman incident. Again they scored an unexpected World Series victory, defeating the New York Yankees in six games.

In each of the next two seasons, the Marlins finished third in the NL East with a 83-79 record. After the 2005 season, owner Loria announced that without a new stadium, the club would be forced to relocate after its current lease ended. Within days of the announcement, the team drastically cut its payroll by dealing highly-paid stars Carlos Delgado, Mike Lowell, Luis Castillo, Paul Lo Duca, Juan Pierre, and Josh Beckett in the second great Marlins fire sale. The Marlins surprised fans in 2006, going 78-84 and even contending for the wild card for a time, despite having a lineup mainly made up of rookies and cast-offs. However, after the season, skipper Joe Girardi was fired due to differences with management, starting a merry go-round of managers that would continue into the next decade. Low-key Fredi Gonzalez took over and by 2009 had the team finishing second behind the Philadelphia Phillies, thanks to solid performances by youngsters Hanley Ramirez, Dan Uggla, Chris Coghlan and Josh Johnson.

However, the Marlins failed to take the next step in 2010 and flailed around .500. A frustrated Loria had Gonzalez fired, tried unsuccessfully to attract a big-name manager, and then settled on Edwin Rodriguez, a skipper very much in the mold of the man he replaced. The Marlins continued to develop good young players, with Gaby Sanchez, Giancarlo Stanton and Logan Morrison all getting their first regular playing time that season. When the Marlins hit a dreadful slump in June of 2011, Loria changed skippers again; gone was Rodriguez, and back came McKeon, now aged 83. The Marlins played better for a month, but with Hanley Ramirez and Omar Infante injured in August, Josh Johnson gone for the season, and Chris Coghlan unproductive after winning the Rookie of the Year Award two seasons earlier, they had another dreadful month, sinking to the bottom of the NL East standings, a bad omen as they were counting down the games remaining before they would leave their unloved football stadium for a custom-made ballpark in downtown Miami, FL where they would play in 2012 under the name Miami Marlins.

Marlins Park opened with a splash for the newly renamed Miami team, which also boasted a new skipper in Ozzie Guillen and some high-priced free agents in Jose Reyes, Mark Buehrle and Heath Bell. After starting the season well, however, the team quickly fell to the bottom of the NL East standings, where they finished the year with a record of 69-93, 29 games out of first place. Guillen clashed with both owner Loria and his players and made unfortunate comments to media that soured his relationship with the powerful local Cuban community, and a number of strong performers from previous years, such as Gaby Sanchez, Hanley Ramirez, Omar Infante and Anibal Sanchez, were traded away during the year. Guillen was fired shortly after the end of the season, to be replaced by Mike Redmond, a member of the 2003 World Series-winning team. The Marlins completely changed tack that offseason, trading Bell away, and then pulling off a huge blockbuster deal with the Toronto Blue Jays that saw most of the team's other veterans leave town, headed by the previous year's other free agent signees, Buehrle and Reyes, accompanied by ace Josh Johnson, C John Buck and IF/OF Emilio Bonifacio. In return, the Marlins received a package of mainly young players, in another of the periodic house-cleanings with which the franchise had become synonymous in its short history. It was quickly dubbed the third great Marlins fire sale, with observers and fans expressing disgust at being taken on another ride.

There were some signs of progress in subsequent years, however, mostly because of the signing of superstar outfielder Giancarlo Stanton to a huge contract, coupled with the development of a few other top-notch players, particularly P Jose Fernandez and OF Christian Yelich. However, the Marlins still did not rise to contention and continued to experience attendance problems in spite of their very nice new digs. One of the more puzzling moves initiated by Loria came in 2015, when he fired manager Mike Redmond and replaced him with General Manager Dan Jennings, who had no prior managerial experience. The move inevitably failed and Loria fired Jennings at the end of the year while the latter's career had been irretrievably ruined by the turn of events. Jennings' replacement as manager was Don Mattingly, a move that for once received near universal praise, given the enormous respect in which "Donnie Baseball" was held.

Tragedy struck at the end of the 2016 season when Fernandez was killed in a boating accident, depriving baseball of one of its brightest young stars. Early in 2017, stories emerged that Loria was trying to sell the team, and had in fact lined up an offer of some $1.6 billion from a group of New York-based investors. These early stories were denied, but the sale process was in full gear, and on August 11th, the Miami Herald reported a deal had been struck to sell the team to a group headed by New York-based businessman Bruce Sherman for $1.2 billion. That group also included former player Derek Jeter who was expected to take over baseball operations once the sale was approved. Former basketball superstar - and short-term baseball minor leaguer - Michael Jordan was also identified as one of the investors. On the field, the season was a disappointing one in spite of the Marlins hosting the All-Star Game for the first time and Stanton having his best season, coupled with the emergence of Marcell Ozuna as another star outfielder. The Marlins still could not break the .500 mark, attendance remained lagging, and they by now had the longest postseason drought by a National League team. The sale to the group headed by Sherman and Jeter was approved by major league owners on September 27th, contingent on the sale being finalized in the next few days.

However, any hopes that the new ownership would bring in a change of approach were quickly extinguished, as Jeter, now installed as team president proceeded with yet another fire sale as soon as he took over. He traded superstar OF Giancarlo Stanton to the New York Yankees after a veritable auction, then in turn quickly trded a number of the team's other players, such as 2B Dee Gordon and OFs Marcell Ozuna and Christian Yelich, getting only a bunch of prospects in return. That quickly soured whatever fan base was left in Miami, as did other tone deaf moves like firing four former players or managers who had been key contributors to the team's two championships and were employed in the front office. This race to turn a quick profit at the cost of the on-field product was widely criticized outside Miami as well, for example by agent Scott Boras who compared the team to a pawn shop. Another wrong note came on February 16, 2018 when the city of Miami and Miami-Dade County announced they were suing Loria and the new owners for failure to give the two governments 5% of the profit on the team's sale, as had been stipulated in the agreement through which the two entities provided funding for construction of the new ballpark. The city and county claimed that Loria had used "fuzzy math" to pretend he had actually lost money on the sale! It was of course obvious to everyone that he had made out like a bandit.

As expected by everyone, the Marlins had a dreadful season on the field in 2018. Attendance was also terrible, as they had the worst average attendance in the major leagues at less than 12,000 per game. The team acknowledged that they had erred the previous winter by trying to raise ticket prices while diluting the product, and announced discounts of up to 25% in 2019, in addition to more perks for season-ticket holders. When they played their final home date on September 23rd, the season's total attendance was just 811,104, a franchise low and the first time a major league team had drawn fewer than a million fans since the lame-duck Montreal Expos had played their final sort-of season in 2004. Following the new ownership's inaugural season, they also announced a change of logo and colors for the team. Gone was the orange which had been the dominant color since the change of name to Miami, as well as the teal blue that had endured since the franchise's creation, to be replaced by blue, red, black and gray, colors that harkened back to the minor league Miami Marlins and Havana Sugar Kings of the 1950s. The font selected for the logo was also designed to evoke that era. Another visible landmark of the previous era was also dismantled, the large Red Grooms sculpture featuring a flying dolphin which Loria had commissioned to be placed in center field at Marlins Park.