Note: This article is about the minor league baseball player who also played basketball in the NBA; for the player from the 1890s, see Mike Jordan. 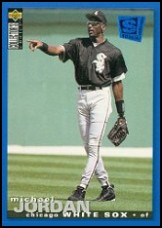 Arguably the greatest basketball player in NBA history, Michael Jordan retired from the Chicago Bulls in 1994 to join the Chicago White Sox AA minor league team, the Birmingham Barons. He batted just .202/.289/.266 and played outfield in his only season in baseball. He was tied with Mitch Simons for 5th in the Southern League in steals with 30, but was gunned down 18 times. His 11 outfield errors tied for the league lead. Amazingly, for a 6' 6" hitter, he drew 51 walks in 497 plate appearances. He cited the recent death of this father as his motivation to give baseball a try; baseball had been his father's favorite sport. Additionally Jordan said that he had nothing more to prove in basketball after three straight NBA titles. His minor league manager was Terry Francona.

Jordan's teammates while at Birmingham included Chris Snopek, Matt Karchner, Steve Gajkowski, Chris Tremie, Doug Brady and Larry Thomas, among others who eventually came to the majors. One of his outfield teammates was Scott Tedder, who had also played basketball very well, being NCAA Division III Player of the Year as a senior. While Jordan hit only .202, the team average was .248 in a park that typically had low averages. Tremie, who hit .225 that year, came to the majors the following year, and Brady, who hit .248, was also up in the majors in 1995.

Jordan's agent, David Falk, later explained that he contacted a few teams other than the White Sox to see if any would also be interested in signing Jordan. Apparently, the Oakland A's were not only interested, but would have been ready to place Jordan directly at the major league level. According to Falk, Jordan was flattered, but felt he could not succeed without a minor league apprenticeship and instead accepted the White Sox's offer. It should be noted that at the time, Jerry Reinsdorf was the principal owner of both the White Sox and the Bulls, so it was a natural fit.

The following season, Jordan returned to the NBA and wound up winning three more NBA titles.

In 2017, his name re-emerged in a baseball context, as a member of the group of the investors led by Bruce Sherman and former player Derek Jeter that made a successful bid to buy the Miami Marlins for $1.2 billion. When the sale was approved that September, he joined the ranks of major league owners just like one of his main rivals for basketball supremacy in the 1980s, Magic Johnson, had done a few years earlier by buying a share of the Los Angeles Dodgers. His share in the Marlins' capital was estimated at 0.5%. Jordan was already the owner of the NBA's Charlotte Hornets.

While with the Barons, Jordan helped finance a new bus for the team. The 45-foot bus has reclining chairs and a large U-shaped lounge area in the back and was nicknamed the "Jordan Cruiser". Jordan autographed the door and the autograph was treated with a protective coating. The bus, operated by Thrasher Brothers Tours, was used by the Barons through the 2002 season. The bus was then used by Thrasher Brothers for trips to the Philadelphia and Biloxi, MS casino tours. It was then sold to Wilson Bus Lines in Washington D.C. and makes regular trips to New York City. Thrasher Brothers was able to sell the bus for a profit; it still has Jordan's autograph on the door.