The Birmingham Barons, formerly of the Southern League, continue a long and rich history of baseball in The Magic City - and the first club lasted for six decades. Including that one, the city and one of its suburbs have hosted three franchises in the affiliated minors as well as a string of Negro Leagues ballclubs.

Birmingham professional baseball began with the formation of the Southern Association in 1901. The Barons remained a member of that circuit through the 1961 season. The Southern Association resisted integration even as Organized Baseball helped lead it; still segregated on the field and in the stands, it folded 14 years after Jackie Robinson broke the Major League Baseball's color line, in the same year as the Freedom Rides, and three years before the Civil Rights Act of 1964. The Barons' original nickname was "Coal Barons", although the shorter form of the name soon prevailed; Birmingham was built on, as well as largely of, steel - and coal played a major role in that.

After 1920, when the Birmingham Black Barons co-founded the Negro Southern League, Birmingham's Rickwood Field hosted two ballcubs until the Black Barons folded in 1960. 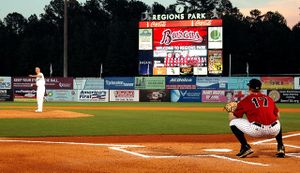 First pitch before a Barons game in 2010

The second Birmingham Barons joined the Southern League as a Kansas City Athletics' affiliate in 1964, the year the former South Atlantic League changed its name and one year after its promotion from Class A. Another Class A circuit, the Western Carolinas League would later resurrect the South Atlantic name and use it the rest of Affiliated Era. This franchise played two seasons as the Barons but took its parent's nickname in 1966. In 1969, after Sulphur Dell in Nashville, TN, was demolished, Rickwood Field became the oldest stadium extant that had ever hosted Organized Baseball seasons. After the 1975 campaign, facing a rent increase at Rickwood, the Birmingham Athletics moved to Chattanooga, TN. They resumed the locally historic nickname Lookouts and remain there going by that today.

In 1981, the Montgomery Rebels changed Rickwood's "oldest" status from extant to active, and resumed the history of the Birmingham Barons when they moved there. Then a Detroit Tigers' affiliate, they switched to the Chicago White Sox in 1986 and remain so today. As of the 2021 season, that is the fourth-longest tenure with the same Major League parent. The Barons left the aging ballpark in 1988 for Hoover Metropolitan Stadium, a large suburban concrete football-baseball facility. 1994 was legendary, as a White Sox non-prospect named Michael Jordan played outfield for the Barons for one summer before returning to his Hall-of-Fame NBA career. In 1996, the Barons started playing one regular-season game a year at Rickwood as the "Rickwood Classic". Birmingham drew the Barons back downtown by building Regions Field, a house that has led the Southern League in attendance every season since it opened in 2012.