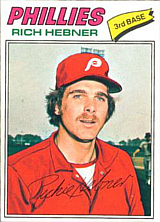 Richie Hebner hit 203 home runs over his 18-year career. He held an offseason job as a gravedigger at a time when major league ballplayers sometimes still held other jobs during the off-season.

Hebner, a first-round pick of the Pittsburgh Pirates in the 1966 amateur draft, reached the majors for good at the age of 21 in 1969. Along with Al Oliver, he formed a much-heralded rookie duo for the team. Hebner was a left-handed line-drive hitter with decent power, and played an adequate third base. He started at third for several Pirates' postseason teams in the early 1970s. Hebner was a slow runner, however, and his value as a starter was largely gone by his late 20s. He stayed in the majors for many years as a platoon first baseman who could pinch-hit and play some third and outfield, notably for the 1977-1978 division champion Philadelphia Phillies and later the Chicago Cubs in 1984. As a result, he played in 8 different National League Championship Series - but only once for the winning team, with the Pirates in 1971, when they defeated the San Francisco Giants in the NLCS and went on to win the 1971 World Series against the Baltimore Orioles.