The Durham Bulls, formerly of the International League and now in Triple-A East, are not the franchise featured in Bull Durham (1988) - contrary to what one might think. The Tampa Bay Rays farmhands play their home games at Durham Bulls Athletic Park in Durham, NC.

The film created a boom-to-bust cycle for those Bulls, who played in the Carolina League from 1980 through 1997. They became the first Class A franchise to draw 300,000 in one season, but that success triggered the idea of building a bigger stadium to attract a higher-level franchise. They moved into the new playpen in 1995, but they were bumped when Durham and its new park landed a Triple-A expansion team that started play in 1998. The erstwhile Bulls are now the Myrtle Beach Pelicans. The new Bulls and the Rays are each other's only partner ever.

Durham-Raleigh baseball history has usually been about rivalry, but they shared a Carolina League team from 1968 through 1971. Since the 1990s, though, Bulls ownership hasn't waived territorial rights, which is why the Carolina Mudcats located in Zebulon rather than in Raleigh itself.

The North Carolina State League resurrected Durham baseball in 1913, filling an eleven-year gap in professional baseball in the city created by the voluntary folding of the first Durham Bulls, also known as the Durham Tobacconists, after their first season in 1902. This Bulls team played its inaugural game on April 24, 1913 on the campus of Trinity College (later Duke University). The Bulls won their first match, defeating the Raleigh Capitals, 7-4. The Bulls continued to play in the North Carolina State League until May 30, 1917, when the league folded due to the United States' entry into World War I. Although the season was cut short, the Durham Bulls were crowned the final champions of the circuit.

The Bulls returned to Durham in 1920 upon the formation of the Piedmont League. In July of 1926, the Bulls moved into their first stadium independent of Trinity College, El Toro Park. The park was commissioned on July 26, 1926 by Judge Kenesaw Mountain Landis, who rode out onto the field on a real bull. The Durham Bulls continued to play in El Toro Park until 1934, when the team was forced to fold due to the Great Depression.

In 1936, the Bulls returned to El Toro Park, which had been purchased by the city of Durham, rebuilt, and renamed the Durham Athletic Park. The Bulls played at the DAP until June 17, 1939, when the stadium burned to the ground. It was hurriedly rebuilt with steel and concrete, and on July 2, 1939 the Bulls defeated the Charlotte Hornets, 11-4.

The Bulls returned to a completely rebuilt DAP in 1940 and continued to play in the Piedmont League through the 1943 season.

The Durham Bulls returned to Durham in 1945 as members of the newly formed Carolina League. The Bulls played their first Carolina League game on April 27, 1945, defeating the Burlington Bees, 5-0.

On August 5, 1951, the Bulls hosted the Danville Leafs. Although the Bulls lost 5-4, this game was a significant point in team history. Percy Miller Jr. made his professional debut, becoming the first Black player in the Carolina League. The Bulls would not have Black athletes on their team until April 18, 1957, when third baseman Bubba Morton and left-handed pitcher Ted Richardson became the first Blacks to play for them. In their first game with the Bulls, Morton went hitless and Richardson took the loss against the Greensboro Patriots, 4-1.

The Bulls continued to play in the Carolina League until 1968, when the team merged with the Raleigh Capitals to become the Raleigh-Durham Mets. The Mets would fold following the 1971 season.

The Bulls returned to Durham Athletic Par on April 15, 1980 - the genesis of the franchise that would find fame on the silver screen, and the first time minor league baseball had been played in Durham since 1971. Later that season, the local CBS affiliate aired the June 22 game - marking the first time a Durham Bulls game was televised. The Bulls gained national notoriety in 1987 when the major motion picture Bull Durham, which focuses on the team, was filmed on-site at the Durham Athletic Park. Following the season, Bulls management began discussion of building a 10,000-to-12,000-seat stadium in order to attract a AAA team. 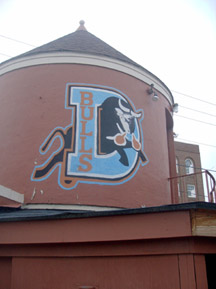 In 1990, the Bulls were purchased by Jim Goodman, president of the Capitol Broadcasting Company. Mr. Goodman announced plans to move the team into a newly built stadium in Triangle Central Park in eastern Durham County. On August 30, 1990, the Bulls drew a crowd of 6,202 to the Durham Athletic Park, pushing the annual attendance to 300,499 fans. This made them the first Class A team to ever reach the 300,000-fan mark.

Following the Bulls' highly publicized "last season" in the Durham Athletic Park, several delays in construction pushed back Opening Day at the new Durham Bulls Athletic Park until 1995. On September 5, 1994, the Bulls lost the last game ever at Durham Athletic Park to the Winston-Salem Warthogs in game one of the Carolina League playoffs.

April 1995 marked the Bulls' first home opener at the Durham Bulls Athletic Park, opening the gates to a crowd of 10,886 fans. The Bulls continued to draw Carolina League-record crowds until August 30, 1997 when the Bulls once again lost 6-4 in 10 innings to the Winston-Salem Warthogs in the last game of their 45-season history in the Carolina League.

In anticipation of the 2022 season, the Bulls unveiled new uniforms modelled on those used in the movie Bull Durham.

On June 13, 2002, third baseman Andy Sheets hit the first inside-the-park home run in Bulls history. That season the Bulls would go on to claim their first International League title, beating the Buffalo Bisons to win the Governors' Cup. In 2003, the Bulls defeated the Pawtucket Red Sox to become the first team to win consecutive cups. 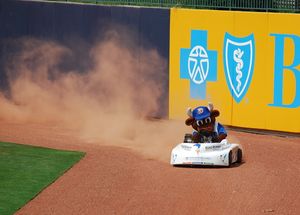 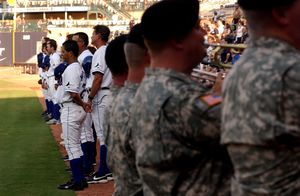