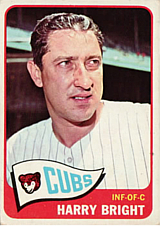 Before the 1946 season, Harry Bright was signed by the New York Yankees as an amateur free agent. He was just 16 when he began his long career in pro ball. Harry was originally a catcher who also could play just about every position on the field. He hit a league-leading .413 with the Clovis Pioneers in the West Texas-New Mexico League in 1950 and two years later, at age 22, was a player-manager for the Janesville Cubs in the Wisconsin State League. His team finished seventh (54-66) but Bright had a league-leading 101 RBI. He moved up through the minor leagues, settling in with the Sacramento Solons of the Pacific Coast League.

After starting the season hitting .309 in 1958, Bright was sold to the Pittsburgh Pirates in July and finally got his first taste of the bigs, at 28, after 12 years in the minors. He spent the last two months of the season with the Pirates as a backup third baseman, starting 5 games and going 6 for 24 (.250) with a home run and 3 RBI. Bright remained with the Bucs for the entire 1959 season but was basically a pinch-hitter, starting only 3 games and appearing afield only 8 games. 1960 saw Bright back in AAA with the Pirates' Salt Lake City Bees affiliate. He dominated, hitting 27 bombs with 119 RBI and batting .313 while splitting his time between shortstop and third base. With the Pirates in a pennant race, Bright earned a September call-up as a pinch hitter within weeks of his 31st birthday. Although the Pirates won the National League pennant and went to the World Series, Bright was not on the postseason roster.

After the season, the Pirates traded Bright to the expansion Washington Senators. He spent the 1961 season in the bigs as a utility player, starting 45 games at third base plus 6 at catcher. In 1962, at age 32 and in his 16th professional season, Bright finally got his chance to start. He began the season on the bench but soon took over as the regular first baseman. He tied for the team lead with 17 home runs and was second on the team in RBI with 67, batting .273 in 392 at-bats. The Senators traded Bright to the Cincinnati Reds after the 1962 season. In April 1963, the Reds sold his contract to the New York Yankees. The 1963 squad was swept by the Los Angeles Dodgers in the World Series. Bright was a backup at first base and third base. He hit .236 with 7 homers and 23 RBI at age 33 and was hitless in two World Series pinch-hitting attempts. In the 9th inning of the Series' opening game, Sandy Koufax fanned him for his 15th strikeout of the game to establish a World Series single-game record.

Bright had persevered for 17 years and finally established himself with three consecutive full seasons as a major leaguer, including an appearance in the World Series as a Yankee. But it was back to the minors in 1964, with the Richmond Virginians of the International League. He finished his major league career as a pinch-hitter for the Chicago Cubs in 1965 until being released at midseason. He returned to the minors in 1965 and 1966 and in 1967, at age 37, he became a minor league manager.