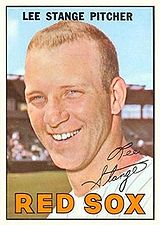 In 2017, Stange was the pitching coach for Florida Institute of Technology, a role he had had since at least 2007.