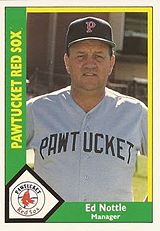 Ed Nottle nearly made the majors as a player and as a manager. As a minor league pitcher who began his career in the Chicago White Sox organization in 1960, he was called up once but sent down before appearing in a game. When the Boston Red Sox fired John McNamara in 1988, Nottle was a candidate for the job, but instead the team hired Joe Morgan.

Nottle recorded an album with the Oakland Symphony Orchestra entitled "To Baseball, with Love." His life is the subject of a proposed movie The 26th Man, about a minor league baseball manager and night club singer.

Nottle was a coach for the Gastonia Rangers in 1974. He began managing for the Oakland A's with the Bend Timber Hawks in 1978. He moved up to the Eastern League with the Waterbury A's in 1979 and the West Haven Whitecaps in 1980. In 1981 and 1982 he managed the Tacoma Tigers. Nottle spent 1983 on Steve Boros' major league coaching staff, then returned to Tacoma for one more year.

In 1989, Nottle replaced Bill Lee as manager of the Winter Haven Super Sox of the Senior Professional Baseball Association. Shortly thereafter, he was in turn replaced by player Leon Roberts.

In 1993, Nottle began an eight year run as manager of the Sioux City Explorers in the independent Northern League. He led the team to the best record in the league in 1994. In 2001 he managed the Duluth-Superior Dukes in same loop, and moved to the Brockton Rox in 2002. When Brockton moved to the Northeast League in 2003, Nottle stayed with them, leading the team to the league championship. In 2006, Nottle returned to the Sioux City Explorers, this time in the newly formed American Association. In 2008, he became the first manager of the newly-formed Ottawa Rapidz of the Can-Am Association but was fired on July 31; at the time, he was just coming back from a leave of absence to be with his wife, who was suffering from cancer.