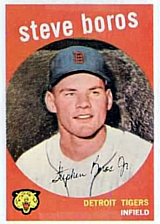 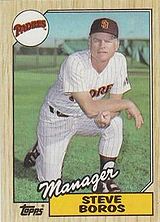 "Steve Boros can't miss. He's got all the tools. Great hands, great speed, great desire – and watch him swing that bat. He's got everything. It may be so, too. For this young man up from Denver... is the most celebrated rookie to move up to the Detroit Tigers since Frank Bolling in 1954." - Joe Falls, 1961

Third baseman Steve Boros was signed out of the University of Michigan by the Tigers in 1957 and went straight to the majors under the bonus baby rule of the time. As a result, his first two professional seasons were pretty much wasted. He eventually was sent to the minors when his obligation to remain on a major league roster expired, and he had a great year with the Denver Bears in 1960, being named MVP of the American Association; he hit .317 with 42 doubles and 30 homers and drove in 119 runs. Back with the Tigers, he played well as the starting third baseman in 1961, hitting .270 with 5 homers and 62 RBI in 116 games, prompting speculation that he would turn into a major star. He missed over a month of action after breaking his collarbone in a collision with P Frank Lary on July 23rd. However, he fell back in 1962, batting only .228 although hitting 16 homers, including 3 in one game against the Cleveland Indians on August 6th. He lost his starting job with the Tigers after that, but was the main third baseman of the Cincinnati Reds in 1964, batting .257 with little power in 117 games. He continued to play regularly in the minor leagues until 1969.

After his playing career, Boros was a minor league manager, then a Kansas City Royals coach from 1975 to 1979 and a member of the Montreal Expos staff in 1981 and 1982. He got his first big league managerial gig as skipper of the Oakland Athletics in 1983 but only lasted a season and a half at the helm. He managed the San Diego Padres in 1986, being named manager in the middle of spring training when tensions between players and his predecessor, Dick Williams, became unbearable. He returned to the Royals coaching staff in 1993 and 1994 and was a Baltimore Orioles coach in 1995.

As a coach, he became intrigued with the role that speed could play in winning baseball games. His San Jose Bees team in 1974 set a minor league record for stolen bases with 372, with players like Rodney Scott, U.L. Washington, Ron Washington, Sheldon Mallory and Ruppert Jones on the roster. He would continue to promote the stolen base as a major league coach, being one of the first persons to use a stop-watch to see the time a pitcher took to deliver the ball to the plate and the time it took a catcher to throw to second base. In the majors in Kansas City, he helped develop Willie Wilson and Frank White into top base stealers, then in Montreal was most famous for his work with a young Tim Raines. As a manager, he had Rickey Henderson playing for him in Oakland, but in San Diego, Bill James famously berated him for giving way too many at-bats to a pale imitation of Wilson, Raines or Henderson, one Marvell Wynne, who was not a good lead-off hitter. Boros was also known for his easy personality, which made him a welcome contrast to the men he succeeded in Oakland and San Diego - Billy Martin and Dick Williams - both known for their fiery temper.

In his year away from the diamond in 1988, he was an advance scout for the Los Angeles Dodgers. In that capacity, he prepared reports on their opponents in the 1988 World Series, the Oakland A's, including one on closer Dennis Eckersley that said he tended to throw a back-door slider on a full count to left-handed batters; that is precisely the pitch which Kirk Gibson hit for a Series-upending home run in Game 1. After stepping away from coaching in 1996, he was an assistant to the Detroit Tigers minor league field coordinator until 2002, then was Director of player development in 2003 and Assistant to General Manager Dave Dombrowski in 2004, when he retired.

Boros majored in English literature at Michigan and was a published author of short stories. He died in 2010 from multiple myeloma.