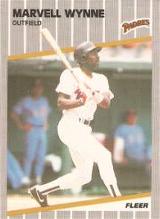 Marvell Wynne played eight seasons in the major leagues, primarily as a center fielder. In his early years with the Pittsburgh Pirates, he had excellent range factors. Not a strong hitter, his highest batting average was .266 and his top home run total was 11. He stole 80 bases in his career, with a high of 24.

He was an undrafted free agent who signed with the Kansas City Royals in 1978 and proved he could hit in the minors. After a year in 1980 with the Royals' Single A club in Charleston, SC, where he hit .278 with 18 home runs and leading the South Atlantic League in triples, he was traded to the New York Mets organization, where he played in the minors in 1981-1983. He was hitting .286 for the Tidewater Tides in 1983 when traded to the Pirates, where he became the regular center fielder that year, playing alongside Dave Parker and Mike Easler in the outfield.

On April 13, 1987, as a member of the San Diego Padres, Wynne teamed up with Tony Gwynn and John Kruk to hit back-to-back-to-back home runs to start a game - the first time in major league history that it had happened.

After his major league days he played for the Hanshin Tigers in Japan.

His son, also named Marvell, was chosen 1st overall in the 2006 MLS SuperDraft out of UCLA by the New York/New Jersey MetroStars. His son is sometimes referred to as Marvell Wynne II. Marvell Jr. was on the U.S. soccer team for the 2008 Olympics.

He is one of three major league players whose last name is Wynne.