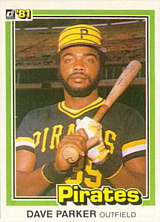 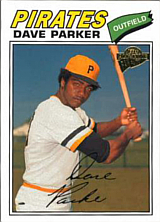 Dave Parker is a player whose hitting credentials seem to make him a strong Hall of Fame candidate, but who did not receive much support in the BBWAA Hall of Fame voting. According to the similarity scores method developed by Bill James, three of the top five most similar players to him are Hall of Famers: Tony Perez, Billy Williams and Andre Dawson. However, in Hall of Fame voting, Parker peaked at 25% of the vote in 1998, and received only 15.3% in 2011, his final year of eligibility. He was involved in a drug scandal during his career, and that may have diminished his vote. Orlando Cepeda also had drug problems, but eventually ended up in the Hall of Fame.

Despite Parker's eventual success in the majors, he was not considered the best player on his high school team. Teammate Bill Flowers, an outfielder, was drafted in the 2nd round of the 1970 amateur draft by the Cleveland Indians the same year Parker slipped to the 14th round. Flowers never made it past Triple A, though he twice led Triple A circuits in triples.

During his eleven years in Pittsburgh, the Pirates won the division three times, and finished second three times. Parker won three Gold Gloves for his fielding from 1977 to 1979. He had a remarkably strong throwing arm which was on display on national television in the 1979 All-Star Game, when he relayed a ball from deep right field to catcher Gary Carter to nail Brian Downing at the plate. He won the Game's MVP Award that year. Earlier that year ,Parker had become the first player ever to earn a million-dollar salary. Although it is commonplace today, Dave was one of the first athletes to wear an earring on the field, which caused further angst for the traditionalists of the day.

After this early peak, things went downhill. Parker missed over 20 games in 1980 and his batting average dipped below .300 for the first time since 1974. He started putting on weight and became surly, enduring some well-publicized confrontations with fans, including an incident when one threw a battery at him while Parker was standing in the outfield. For a while, he took to playing his position wearing a batting helmet, an overreaction that added to the backlash against him. In 1981, with the Pirates slipping into the second division, he hit .258 in 67 games. It was more of the same in 1982, as he hit .270 with only 6 home runs in 73 games, missing half the season to various injuries. Fans were openly questioning his desire to play by this point, and everyone was wondering what had happened to his considerable hitting talent, as he was only 31. It would later be revealed in the 1985 Pittsburgh drug trials that he had become a habitual drug user during that period, and the habit was affecting his overall health, his personal life, and his performance.

Parker started bouncing back in 1983. Finally healthy, he played 144 games, hitting .279 as the Pirates were in contention for the first time in years. He became a free agent after the season and signed with the Cincinnati Reds, his hometown team (he had been born in Mississippi but had grown up in Cincinnati, OH). From 1984 to 1987, Parker played for the Reds team managed by Pete Rose. Eric Davis was a young player on that team, which finished in second place several times. Parker was still a top player at times, finishing second in the MVP voting in 1985 with a .312 average, 42 doubles, 34 home runs, and 125 RBI. In 1986, he was fifth in the MVP voting, with 31 home runs and 116 RBI.

In 1988, at the age of 37, he joined the famous Oakland Athletics team that won the pennant that year and won the World Series in 1989. His teammates included Rickey Henderson, Mark McGwire, Jose Canseco, Bob Welch and Dave Stewart. He drove in 97 runs in 1989 and was eleventh in the MVP voting.

In 1990, at the age of 39, he played for the Milwaukee Brewers. He had the second highest batting average on the team, and also had the second highest home run count. He led the team in RBI with 92. After the season, the California Angels traded top prospect Dante Bichette to the Brewers to obtain Parker. They made him their DH, but released him before the 1991 season was over, and he signed with the Toronto Blue Jays. He hit .333 with them in a short stint, and they won the division, but he was not eligible to take part in postseason play.

He is 29th all-time in terms of MVP award shares, ranking higher than Joe Morgan, Al Kaline, Ernie Banks, Roberto Clemente, Johnny Bench, and Mel Ott, plus numerous other Hall of Famers. After washing out of the BBWAA voting for the Hall of Fame, his name came under consideration by the Veterans Committee for the first time in 2018, but he was not selected that time either, receiving fewer than 7 votes (the exact total was not announced). He was again on the ballot in 2020. In 2014, he was inducted into the Cincinnati Reds Hall of Fame.

Parker was diagnosed with Parkinson's disease in 2012 and made his condition public in an interview in August of 2013, although he added that he was able to deal with the condition with a healthy diet and exercise.

"When the leaves turn brown, I'll be wearing the batting crown" - Dave Parker in mid-season 1978

"Until I joined [the Pirates] I'd never realized how big Dave Parker was. I'd put him up against the French Army." - Phil Garner